A Tale of Mirth, Woe and Pain, but mostly Pain

Sexually Transmitted Diseases (STDs) affect and blight the lives of up to 10% of our youth today. The social stigma and shame should not be underestimated. Also, knob rot hurts like fuck.

Here is my cautionary tale…….

Imagine a young Flaxen Saxon, brash, wickedly handsome, with long blond hair a flow, out with his mates on a Saturday night at the Brum Locarno Night Club and Abbatoir, circa 1974. All dressed in wide lapelled crushed velvet jackets and flairs.

Sometimes I’d leave at 3 o’clock in the morning covered in blood and snot. Sometimes I’d leave at 3 o’clock in the morning with a vaguely feminine form clamped to my arm. Once in the alley, at the back of the nightclub, I would distract my ‘date’ with a humorous impression of Keith ‘Cheggers’ Chegwin. An impression I was particularly adept, whilst pissed.  In those days, I always kept a small squeezee bottle full of Domestos discretely inserted down my trousers. Whilst distracted, I would give my intended a quick squirt around the ‘bowl and rim’. I’ve always believed that prophylaxis is better than cure. Often I would add a couple of crushed Palma Violets just to show that I cared about feminine freshness.

As I’m sure you will remember, Domestos used to proudly announce that it killed 99.9% of all known germs. Alas, on one occasion I became a statistical anomaly. I had inkling that something was amiss, when two weeks later I expressed a small amount of bland, serous fluid. I thought the best course was to ‘wait and see’. Three months later my fireman’s helmet had the look of a busted pomegranate and issued forth a foul smelling odour. As I lapsed in and out consciousness a moment of serene lucidity descended. My tumescent and weeping member popped up, winked and wiped a thick, yellow tear from its eye: ‘you dozy, fat, blond twat, catch the number 127 bus from Dudley Castle to Birmingham General Hospital.’ And then it kissed me. I decided to take a premed of seven pints of Bank’s bitter before alighting in . Although late at night, my swollen member gave off a faint ethereal glow and I was mysteriously guided to Ward 19.

Dr Mugumbo took a long drag on his cigarette, squinted and softly exclaimed: ‘Mr 74/3879, that’s not clap, that’s applause.’  After a vigorous course of antibiotics and scouring, the end of my cock sloughed off. Thereafter I was as good as new. Chastened, I never performed Keith Chegwin impersonations again. 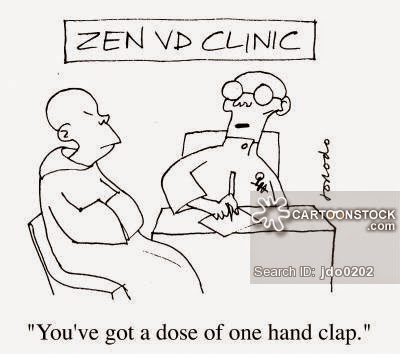