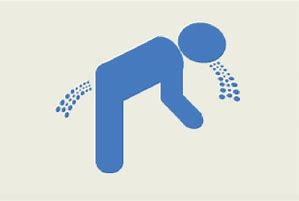 You will have noticed that my blog has become moribund this month. This is but a temporary phenomenon and will be rectified in the following months. To be honest it has not been a happy month for the Flaxen homestead. As said before, my daughter, her partner and two daughters are currently living with us in our humble four-bedroom home. They moved in three years ago, and naively, I was under the impression we were providing temporary 'emergency housing'. In truth, my daughter has few options when it comes to re-housing and her partner is renovating an old school bus for permanent living: No comment. Tis a slow process and Mr S and I have given an ultimatum- leave by the end of Autumn. This is not how we envisaged our well-earned retirement. Suffice it to say there have been several highly stressful issues, this month, that have discombobulated our equilibrium. I'm getting too old for this kind of shit.

Later in the month, the family was subject to a really nasty dose of Norovirus, aka, 'the winter vomiting bug' which is 'endemic' in my part of the world, currently. It spread rapidly and four out of the six members of the home were ultimately affected. The bucket becomes your friend/fiend and it took three days of fasting and a further seven days before my intestinal tract went back to normality.

During these times of 'Great Tribulation' (refer to JW literature) I lost all motivation to write and the blog entered the hinterland of limbo. I am under no illusion. My blog is niche and not meant to be for the majority of the folks, 'out there'; and that is the way I like it. Very few get or appreciate my delicate brand of humour. To be fair, I mostly write for myself. Tis a mode of self-education and it helps to keep the demons in my head at bay (down Rex).

Consequently, I'm planning to be productive in the jolly month of July and intend to sequester myself away in my study for long hours of contemplation and writing. In this blog, I have previously addressed 'The Extra Terrestrial' question from a variety of perspectives. I have considered the Fermi Paradox and the elegantly simple Drake Equation as well as the problem of travelling vast interstellar distances and the plausibility of extra-stellar space travel.

According to the Drake equation, it has been estimated that there should exist, in the order of 50,000,000 advanced technological civilisations in our own galaxy alone. This is before we extrapolate to the number of galaxies in the known universe (2 trillion?). And again his can be expanded as the universe, as a whole, is considered to be immensely and mind-bogglingly huge. Of course, if the universe is infinite, then we will have to think anew. Personally, I'm in favour of a finite Cosmos, for reasons I will expand upon in a future post. Before continuing I'll just review Drake's original insight.

The equation first formulated in 1961 can be represented as:

The above parameters are those considered most important when calculating the number of extant intelligent civilisations floating about within our Milky Way galaxy.

Some may find this equation wonderfully simple, and of course, it is. Although I'm a great fan of keeping explanations as simple as possible, sometimes simplicity can belie and mislead the beholder. I suspect this is one of those occasions.

Many folk support Drake's findings, although to be fair, these days, most cosmologists are more circumspect in their opinion. It needs to be recognised that certain, critical, assumptions necessary to populate five out of seven equation terms are highly speculative; only the initial two terms have a foundation in science. For instance, consider the term, ne, which refers to the fraction of planets that are able to support and develop life, at some stage in their existence. This number is no more than a guess. At this juncture, it is noteworthy to state that in 1961 we didn't even have reliable quantities for the first two terms (R* & fp), although nowadays we are better placed to make scientifically valid estimates.

Scientific principles are, at their best, based on the existence of solid and repeatable data sets. The whole 'concept of scientific endeavour' is based on the empirical method. Without data collection, science, at least as we know it, would not be possible. Having stated this fundamental principle we need to ask how data is able to assist with the variable, fg. And of course, here is the rub, the grand total of our data gathering comes down to the grand total of 1. As far as we know, we are the only planet that supports life. I'm not saying that life does not exist elsewhere in our galaxy, I'm saying we have no firm evidence for the existence of life apart from our own. To base our equation on such a miserable paucity of hard data removes us from the realm of speculation into the land of 'wand-waving and wizardry'. In other words, any number that we plug into the equation for fg is without any foundation. On the basis of this single term alone, the equation becomes meaningless. We expect better from our mathematics. After all, mathematics is ultimately a logical construct and needs to be unfettered by unproductive speculation. This only refers to the possibility of life elsewhere, not the actual formulation of intelligent life (fi). If we have no idea or regard for the possibility of extra-terrestrial life then our ability to populate fi is not even a bag of lemons (that is, fruitless). It gets worse: As said, of the seven variables comprising the Drake equation we only have reasonable estimates for the first two. The remaining five are unknown quantities. Here we have the illusion of precision. Mathematical equations tend to offer the prospect of logical impermeability and immutability, and so they should, with one very crucial caveat: The equation may be sound and logical, in principle, but the quantities entered should also be reliable and sound. As the old adage states- 'Bollocks in, Bollocks out'.

To be fair to Dr Drake he, initially at least, didn't expect his equation to be taken as seriously as it has subsequently become. As I understand it, Drake didn't devout much thought to the situation. It seems he scribbled his thoughts on the back of an 'envelope' prior to a scientific cosmology meeting. The equation was a simple tool to stimulate discussion on the topic of extraterrestrial organisms amongst his peers. I'm not suggesting that Drake was insinuating that his colleagues were xenomorphs. Regardless of Mr David Icke's contention that we are surrounded by extraterrestrial lizards, there is no evidence to support his conjecture, royalty excluded. Moving on. The fact that others have read into the equation more than was originally intended is no fault of the esteemed Dr Drake.

I think I will leave the subject at this junction however, I will be interested in what others have to say. Please append opinions in the comment field. I thank thee. 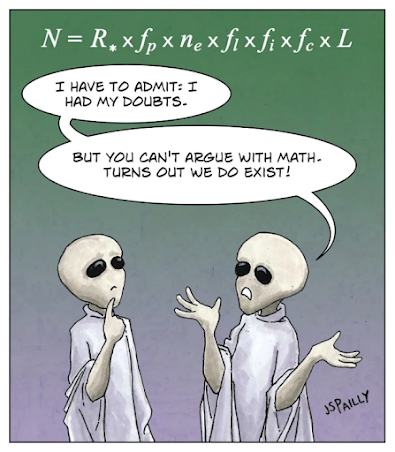