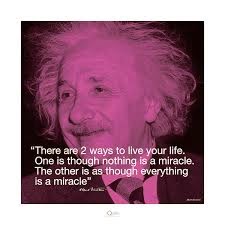 I was trawling through 'Arsebook' the other day when I came across an article about Christianity. Specifically, it addressed several hypothetical questions which atheists could conceivably ask Christians. One particular section made me chortle out loud. It concerned the plausibility of miracles as related in the bible. As you are no doubt aware, the bible is replete with miraculous events performed by the Son of God et al. Anyway, I will quote the response in full:

"That’s what’s so special about miracles: they don’t make sense! Frankly, miracles wouldn’t be miracles if they were physically possible. Whenever Jesus performs a miracle in the gospels, the crowds or disciples are in awe precisely because of how unbelievable these actions were".

So there we have it. A well thought out and cogent response to the doubters. In essence then, miracles are possible because of their inherent implausibility. There is a strain in Christianity, and other religions, which is anti-reason and takes pride in inverting sound rationality. Tis a Christian virtue and true believers revel in this nonsense. We become 'wise through ignorance', is a constant refrain.

Before considering arguments concerning the implausibility of  miracles it is a good idea to have a valid definition. Some theologians define 'a miracle' as divine intervention in the natural course of events. As this definition  presupposes the existence of god it is not likely to appeal to the thorough going rationalist or atheist. Personally, I prefer the following definition: Miracle- An event that is not explicable by natural or scientific laws. According to this definition, defying the odds would not be a miracle. The sole survivor of a plane crash should consider himself lucky, but this not a miracle. The other passengers who didn't survive would surely agree, if they could.

To my mind the following scenarios would be considered miraculous: Bringing the dead back to life. In this regard, I'm not thinking about the heart attack patient who is revived by medical skill. I'm considering medical death. If your heart had stopped beating for three days and you suddenly became animated, then this would be a miracle. Similarly, if you walked on water without  physical means of support, again this would be miraculous. Hallelujah!

Therefore, a miracle is a temporary suspension of 'natural law'. It is wise to consider the implications of this deceptively simple statement. Everything we know about the world is subject to causality. The laws of science enable us to make sense of the visible world. They also encompass predictability. If I hit my thumb with a hammer, pain will inevitably ensue. But what if the 'laws' which define reality become arbitrarily suspended on the whim of a deity; what are the consequences. Surely if a dead man can be raised once then it could happen again. If natural law does not always apply then we enter a chaotic world where every inconceivable action becomes possible. Everything which can be scribbled on paper becomes the new reality. I contest this possibility with a vehemence born of madness (Arse). It is easy to state a miracle, but the proof lies with the evidence. 'Show me the evidence, show me the evidence'....... As none is forthcoming, the notion should be expunged from the realm of the rational.

Miracles cannot occur. Natural law is never suspended (perhaps the infinitesimal quantum world remains an exception). I contend that if one miracle could be shown to occur in the real, macro world, then everything we know about the natural order of things collapses into an incoherent morass.

So, I will leave the last word to the great British Empirical Philosopher of the 18th century: David Hume. What he says is still valid today. His principles are timeless and echo down the centuries. In his wisdom, all rational folk can find refuge in a world gone mad. He was also a fat bastard.

"No testimony is sufficient to establish a miracle, unless the testimony be of such a kind, that its falsehood would be more miraculous than the fact which it endeavours to establish."