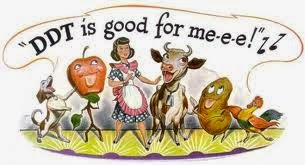 As endorsed by Rachel Carson

Remember DDT? Wonderful stuff? Killed all life forms in a matter of minutes. I remember my dad using it on his allotment in the 1960’s. He used to shovel the stuff all over his vegetable patch. Beetles, spiders, bees, the neighbour’s cat would be on their backs in seconds kicking and spinning before expiring. Consequently, we had the largest and juiciest veggies in the locality. No spots on Mr Saxon’s marrows. I was reminded of these halcyon times the other day whilst cleaning out the garage. In the corner I found a large container of the stuff unopened. As I was having trouble with boring weevils on my tomatoes I thought it worth a try. I dusted the stuff liberally all over my garden. I wasn't disappointed. Next day the garden had taken on the aspect of a graveyard. Whole generations of creatures were bestrewn throughout. I suspect I might have driven a couple of species to extinction. I was so proud. Anyway, I was suitably impressed and moved to such an extent that I decided to pen a poem extolling the virtues of this most wondrous and versatile of chemicals.

Ode to DDT
O, DDT where are you now, when we need you the most,
I sprayed you on my tomatoes, I sprayed you on my toast.
You killed the diptera, hymenoptera and all orders under the sun,
Watching the buggers wriggle, jump and jiggle was always so much fun.
The wasteland you produced gave me such a thrill,
The pleasure of watching things die quickens my pulse still.
O, DDT it is time for you to make a comeback,
The insecticides of today are weak and indiscriminate powers do lack.
The local rats, the neighbour’s cat, have all to Vallhalla gone,
I can’t think of a suitable end to this rhyme so I’m just going to say, Herbert Lom.