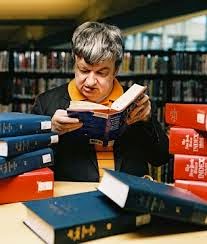 Kim Peek doing what he loved most. Good man that Mr Peek


Kim Peek was born in 1951 in the United States. At birth it was noticeable that he had an unusually large head (macrocephaly) and further tests revealed he had brain abnormalities. Specifically, he lacked a corpus callosum. The corpus callosum is a band of nervous tissue which sits in the middle of the brain and provides a neural connective bridge between the two hemispheres. He was diagnosed with mental retardation and it was recommended that he should be raised in a suitable institution. His parents ignored this advice.

Kim’s unusual abilities became apparent when he was 18 months old when he revealed his phenomenal ability to remember things. As he grew older he began to read voraciously. He was able, due to the lack of connectivity between his brain hemispheres, to read separate pages with each eye, independently. In this way he could read a thick book in about an hour. Even more remarkably he had almost total retention of the information. Over his life he devoured around 12,000 books on diverse subjects such as history, geography, music, sports and literature. Little of the information he acquired was lost and he could recall information from books he had read years before.

As an adult he toured the country, with his father, amazing audiences with his astonishing memory and his ability to recall important events relating to specific dates. Apparently he supplied the inspiration for the film, ‘Rain Man’ although to the best of my knowledge, Kim was not autistic like the character, ‘Raymond Babbitt’ in the film.

But as is often the case, with great abilities, there are also great deficits. Kim couldn't walk until he was four and throughout his life he remained ungainly and awkward. Although he had prodigious talents for recall, his IQ remained a stubborn, subnormal 87. His abilities did not seem to extend to an analytic appreciation of the things he remembered. He could retain knowledge but could not process it. This illustrates the difference between knowledge and wisdom; there was no real insight to Kim’s repertoire. Nonetheless his achievements remain astonishing and largely unexplained.
Sadly Kim Peek died of a heart attack in 2009 at the relatively young age of 58. I suspect until the very end Kim Peek was bewildered by the world as much as the world was bewildered by him.