Ahhh, A Vision in Carmine 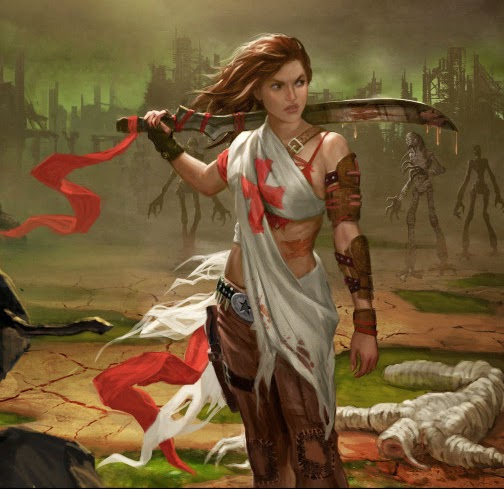 I know what you are thinking. You are thinking that this is Edith 'Swan Neck' on one of her legendary shopping expeditions. But you would be wrong. This is actually Ecolalia 'The Amazon' on one of her epic shopping expeditions. I suppose you are wondering what a 9th century Teutonic barbarian would know about the Amazon, or Amazons for that matter. Well, I actually discovered the Amazon basin together with the rest of the continent. We landed initially a lot further north. I named the placed 'New Tiptonland' in honour of my birth place. The locals were absolutely charming and showered us with sundry goods and gifts. They did adhere to the disturbing practice of placing feathers through their nose. Come to think of it, it might have been bones. I digress. Anyway, this most charming folk had no conception of strife or warfare, so we killed them. Purists among you may think an opponent should have a bit of fight in them, otherwise it is not very sporting and detracts from the fun. I do not subscribe to this view. I prefer my enemy tied against a tree. The tighter the bonds, the less they wriggle- helps with the throat slitting.

Feminists will take comfort in the fact that we didn't despoil the women. Now it is true that Angle, Saxon and Jutish women are not overly fastidious in their feminine hygiene, but these native women were covered head to foot in rancid bear grease. Yuk. So we left them to keen over their fallen men folk. Quite touching really.

Eventually, we arrived at the Amazon rain forest. The natives were a lot less friendly than their northern brethren and waived pointed sticks at us, so we killed them. Again we left the women unsullied. This time because of their annoying habit of anointing themselves with something called 'Oil of Ulay.' And also because the women are decidedly ugly.  I thought the place a little too 'treey' for my liking so I initiated an extensive deforestation program. It is my fervent hope that others will continue my heroic tree felling enterprise after my descent to Valhalla.