Of Pixies and man... 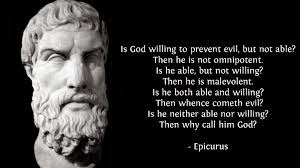 Atheism is the most misunderstood doctrine. People are confused. So to set the record straight let us determine what atheism is and what it is not. Atheism is a lack of belief in deities. Thus it is not a positive belief. The atheist, as such, therefore does not have to defend his position or offer evidence for his stance. The onus of argument and proof rests solely with the theist. In the same way that a non-believer in pixies is not required to posit evidence for non-belief in pixies. If you believe in pixies it is incumbent on said individual to provide rational evidence for their belief. Otherwise, their belief exists outside rational scrutiny, and therefore is not worthy of sensible consideration.

There is a lot of baggage when it comes to being an atheist. People make assumptions. Atheists are amoral, immoral, communists or nihilistic. It is true that all of the preceding characteristics are not incompatible with atheism, but this is not the point. There are atheists who are communists, philanderers and full of despair, as are Christians. The point being that when someone tells you that they are an atheist all you can discern is that they are a non-believer in gods. Nothing else is discerned. Atheists don’t have to agree on anything else, whether in politics, morality or philosophical stance. There only common accord is atheism.

How can morality exist if there is no god? A world without god will surely lead to anarchic and immoral chaos. But surely a moral code can exist without a belief in god. We know it is wrong to kill, steal and covert your neighbour’s wife. These basic tenets are necessary for any well-ordered and civilised society. Indeed, you could argue that an atheistic morality is superior as it is justified by the merit of doing good and is not tinged and influenced supposedly by rewards or punishment in a mythical hell or heaven.

Surely let us enjoy this life. Feast, drink wine and make love to your wife. Arse…..

“Do not pass by my epitaph, traveller.
But having stopped, listen and learn, then go your way.
There is no boat in Hades, no ferryman Charon,
No caretaker Aiakos, no dog Cerberus.
All we who are dead below
Have become bones and ashes, but nothing else.
I have spoken to you honestly, go on, traveler,
Lest even while dead I seem talkative to you.”