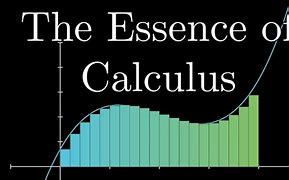 Is there anything more sublime in nature than the branch of mathematics entitled, calculus? I see the eyes of my readership glaze over and heavy despondent heads sink slowly to heaving breasts. This is the standard reaction when most folk encounter anything mathematical, especially if relating to the perceived notion of, 'Higher Mathematics'. And it is true that calculus can be conceptually complex, if you allow it to be so. But the underlying principles are relatively simple and can be grasped by those who would not consider themselves 'mathematically literate', if they are prepared to put forth a little effort.

When I first encountered calculus 45 years ago I was mesmerized by its underlying principles and its utility in a host of disparate natural topics. Calculus is founded on the concept of infinity, an abstraction both immeasurably subtle and profound, but also calculus is, without doubt, the most useful mathematical tool we have for solving real life practical problems. It is without hyperbole to state: that much of our technological and scientific achievements would not have been possible without the application of this wondrous mathematical process.

This post is an introduction to an introduction. This will be a trilogy, of many parts and a series that will unfold as I see fit. Hopefully there will not be an inkling of a 'petit mal'- a grand mal is not even in the realm of a possibility, fingers crossed. My aim is to cover the development of calculus, from its 'inception' 2,500 years ago, through to the conceptual breakthrough independently 'discovered' in the mid 17th century by the two greatest minds that have ever existed, Newton and Leibnitz. I'll deal with subsequent developments and explain how calculus has contributed to numerous scientific and technical innovations. But, do not worry gentle reader, this is not going to be a 'mathematical treatise' resplendent with dense mathematical notation. I will strive to make the enterprise intelligible to the educated lay person with a modicum of intellectual substance. It will require no more than a grasp of elementary mathematics, unless I get very drunk.

This is a germ of a project that has been lurking upon my mind (up on the right and on the second shelf) for quite a while now. I feel it has evolved and progressed to a stage where I can confidently write about the topic in a sequential and coherent manner. To be fair, intellectually important topics, though ultimately complex, are vulnerable to simple breakdown and exposition. This is my goal.

I'm acutely aware that my blog is highly niche, anyway, especially when it encapsulates my strange, and often, incomprehensible humour (even to the author). Ultimately however, the blog is not an exercise in popularity. For me, it is an exercise in the intellect. Most of my writing is directed to a mythical character called, Flaxen Saxon, and, of course, to the incessant voices in this character's head. If I manage to capture and enslave a few world weary free thinkers along the way tis both an intellectual bonus and a means to engage and commune with like minded folk.

The second installment in this 'ripping series' will make its presence known, but in a thrice. Arse.