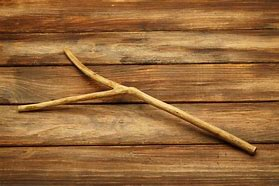 What are we to make of the phenomenon, that is dowsing? Is it to be tossed into the bin of 'irrational 'technologies', or does it warrant serious consideration as a legitimate natural phenomenon?

I'm sure my readership is familiar with the art of dowsing. Is it possible to frame a scientifically valid causal hypothesis concerning dowsing's mode of action? Classical dowsing is concerned with the detection of flowing underground water. Could water flow cause the formation of a detectable electromagnetic field? Tis at least worthy of scientific scrutiny. Thusly, flowing water interacting with a subterranean substrate, may induce a fluctuating electric field, that in principle, could be detected by a sensitive and simple, hand held device such as a 'dowsing wand'. Of course, adherents often claim much more, such as, the ability to detect oil reserves, gold deposits, and even buried ancient man made structures. Oil and mineral prospecting companies have been known to employ dowsers in an effort to detect untold wealth. The general public are apt to lend a positive ear and are surprisingly receptive to dowsing. Indeed, 40% of the US population are staunch believers. But then again, 40% of the US population also believe in creationism as opposed to evolution- tis enough to make a rational bonce revolve 180 degrees. Nuff said (arse).

The dowsing device can vary from a simple forked branch, to metal rods allowed to independently rotate, to cunningly fashioned black boxes containing electronics and knobs. So, as said, there may be a perfectly plausible scientific reason explaining dowsing's effectiveness. This would constitute a valid hypothesis. A possible scientific explanation, before any scientific investigation is performed, is termed, 'the hypothesis'. Before a hypothesis can earn the exalted status of a theory, positive experimental evidence is required. And this is where our posited hypothesis flounders (wet fish). Simply stated: numerous researchers have failed to come up with any hard scientific evidence supporting the efficacy of dowsing as a real natural process for detecting underground water, or anything for that matter. When controlled experiments have been conducted, the detection of hidden objects, by dowsing devices, has been found to be no more than chance. Therefore, the hypothesis has been found wanting and consequently dowsing is not a viable technique for the detection, of anything. Hard nosed dowsers seem unconcerned that science has not been able to uncover a causal mechanism. For them the technique works. And it does appear that dowsers do experience involuntary muscular movements that cause dowsing rods to move. This in no way demonstrates that dowsing is effective, but is likely due to 'ideomotor movements'. This is fancy psychology jargon for 'it is all in the mind' and is under subconscious mind control. This is a similar effect observed when gullible folk play around with the Ouija board.

I would like to introduce 'The James Randi Educational Foundation' and its 1 million dollar challenge. If someone can produce real evidence, under rigorous scientific conditions, that demonstrates paranormal abilities, then the foundation will award the individual with the princely sum of 1 million dollars. Since the challenge was put in place, hundreds of applications have been submitted to the foundation for testing. Interestingly, 80% of  the applications are about dowsing ability. And guess what? The reward awaits to be claimed.

Dowsing is very popular amongst the 'New Age' crowd. They are also keen on other dubious pseudoscientific beliefs, such as crystals and alternative medicine- see earlier postings. Fringe groups are notoriously anti-science and take great delight in disregarding true scientific principles and replacing them with utter gobblygook and sundry bollocks.

To conclude: dowsing clearly comes under the umbrella of pseudoscience and should be treated in the same way we would treat astrology and a belief in ghosts. All that can be considered without evidence, can be dismissed, without evidence.

“We must accept dowsing as fact.  It is useless to work experiments to prove its existence. It exists.  What is needed is its development.”

The above was expressed by a prominent dowser, Charles Richet. This really sums up the anti-scientific stance typical of the 'pseudoscience brigade'.