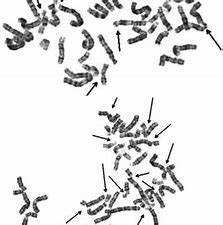 Chromosome preparation showing the typical damage after in vitro exposure to a clastogen (mitomycin C). What an exciting/tragic life I lead.
As my regulars are well aware, I work two days a week in a genetics lab. One of my many duties is to oversee a specialist genetic test. In fact, we are the only laboratory in New Zealand to offer this diagnostic test.

Let me introduce a rather nasty genetic condition called, Fanconi Anaemia (FA). This condition is usually inherited in an autosomal recessive fashion. Thus, although each parent carries the condition, they our free from clinical manifestations. The problem occurs when the couple produce issue, as 25% of their offspring will be affected with FA. The condition may present at birth due to congenital malformations or may be suspected in adolescence due to bone marrow failure or the development of acute leukaemia. If the presenting clinical issue is leukaemia, chemotherapy is usually considered as a first line treatment. The problem however, is that these patients suffer from an inability to repair a particular type of DNA damage. Unfortunately, if the patients are given the standard dose of chemotherapeutic reagents it is likely they will succumb to the treatment as they are exquisitely sensitive to agents that interact with DNA. Fortunately FA is rare condition affecting around 3 in a 1,000,000.

Of course, bone marrow failure and leukaemia could be due to a host of conditions more likely than FA. That said, it is highly important that the rare subset of patients with FA is identified as they must receive an attenuated drug regimen to treat their leukaemia. However, FA is a condition that is caused by a large number of genes that contribute to DNA repair. Therefore, standard genetic testing, using a large genetic panel, can be expensive. There is another, cheaper option. A relatively simple test has been devised that takes advantage of the patient's sensitivity to DNA damaging drugs. The test involves growing the patient's blood cells in a test tube and exposing the cells to a DNA damaging compound called mitomycin C. Subsequently the cells are harvested and dropped onto glass slides. After DNA staining, and interrogation with the aid of a light microscope, the presence of DNA damage, mediated through chromosome damage can be measured. Affected patients exhibit very high levels of breakage in comparison to a control blood sample obtained from a none related individual. The test utilises two different concentrations of mitomycin C. In none affected individuals, and the control, we should observe a minor degree of elevated breakage, but not the excessive levels indicative of a positive diagnosis. This is because 'normal' people are able to repair the vast majority of the DNA damage. This analysis is considered a 'robust technique' and highly correlated with the disorder. But it does not identify the underlying genetic defect/mutation. Further molecular studies should ensue if a positive breakage analysis is observed.

Last month, I conducted the test on a young male adult with a low blood count, and while FA was considered an unlikely diagnosis, it was important to exclude the condition, for reasons previously discussed. I made the slides as usual, with due diligence, and began to assess the chromosome damage, according to my scientific wont. The patient was found to have breakage levels within the normal range indicating that the patient was free from this dreadful genetic, malady; all well and good. But the control gave a rather strange result. All cultures, without the addition of mitomycin C, gave the expected breakage result. However, when I came to review and analyse the cultures containing mitomycin C, I came across a rather interesting result. In these cultures, there was no evidence of cellular growth and hence I was unable to score for chromosome damage; all the cells had been completely obliterated. A very curious result indeed. On investigation, it transpired that the control blood sample had been collected from a young, healthy doctor. Furthermore, the doctor had recently received his first inoculation of the COVID19 vaccine. Could it be that the vaccine and drug were interacting together to cause a catastrophic loss of cells?

A word of warning and caution. Although, my initial observations are consistent with the hypothesis that: in vivo COVID19 vaccination plus mitomycin in the in vitro environment causes cell death.  This observation, should in no rational manner, be used as justification to consider this as positive evidence for a causal connection between the two agents. My single/singular result is just that, and is to be considered as 'anecdotal evidence'- or in words of the 'Scientific Prophet', no bloody evidence, at all. Arse. In the ideal scientific world, my findings would be the basis of a double blind, and extensive, scientific trial. I doubt this will happen, for reasons various.

I don't want to lend ammunition to the anti-vaxer brigade. My observations are interesting, but should not be extrapolated too far, or at all, on their own, merit. After a little research, I did find prior evidence suggesting, that vaccines, in general, can interfere with DNA modifying drugs. This is considered an in vitro phenomenon. Or in other words, it is a reaction that can be demonstrated in the 'test tube' but may have no effect in the in vivo environment (ie the body). So, in conclusion, my results are simply intriguing and should form the basis of an interesting scientific study.

Anyone out in the 'big wide world', of a philanthropic bent, willing to stump up the estimated $NZ 50,000 to enable this itinerant geneticist to perform valuable research? Mayhap I should contact Elon Musk?

Or mayhap, I should truly embrace, true retirement.