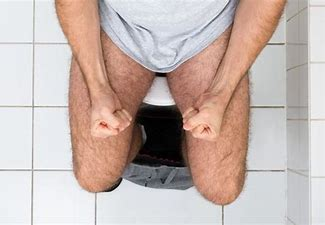 But why is the medical profession concerned with frozen potatoes? It doth appear that folk sundry are stuffing the aforementioned frigid vegetable up da arse to relieve the malady known as haemorrhoids. The flaxen haired one has never suffered from this indisposition, however I have friends so afflicted. I've been told that the combination of the itch and the pain is enough to propel a man into god hood.

Haemorrhoids, from a medical perspective are no more than varicose veins that descend outside the anal cavity. There are numerous home remedies that include shoving the offending veins back in with a stick and afterward applying a cold honey compress. One hopes that the stick is checked first for irregularities; the recipient has to be hyper-vigilant for offending splinters. Actually this makes good sense as honey is an excellent antibiotic and anti-inflammatory. The 'cold chip' scenario seems less sensible. Mayhap the cold comestible offers some relief and the bulk of the item retains its negative calorific value for awhile. I will refrain from making inappropriate, 'wedgie jokes'.

I suppose the problem is that sufferers are too embarrassed to approach the doctor with said ailment, which is sad, as there are a plethora of medically effective treatments, such as, the administering of a  soothing balm to the nether regions, to salves, and finally, depending on the severity of the condition, cauterisation. Thus, the 'hot poker' up da arse is sometime warranted.

I will finish on a sage note, as befits my nature: