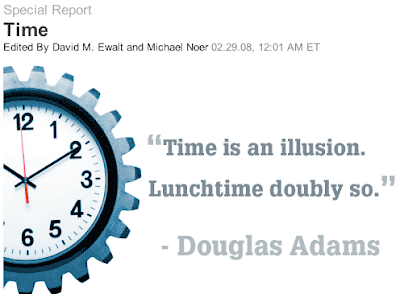 Our lives are governed by our 'sense' of time. We awaken to alarm clocks, we attend 10 o'clock meetings and leave the office to go home at 5. Unless we are totally anarchic and chaotic we all march to the steady beat of time. But what is time? What is it, exactly? What is its deep essence? We all have a subjective but never an absolute notion of time. We reference our understanding of time to events. However, you could contend that time is a mere artefact of a string of events, happening. Is time independent of a causal universe? If we could cool the universe down to absolute zero (-273 C) so that all atoms 'freeze' and all motion ceases, would time still exist? In this scenario even light (photons) and other electromagnetic radiation would eventually cease to be after being absorbed by matter. However, you would have to wait an almost impossibly long time for this to occur. And then you have the confounding problem that matter at absolute zero absorbing electromagnetic radiation would heat up. In this case you would have to cool the universe down all over again, which can be bothersome. Incidentally, this thought experiment is not possible in the 'real universe' (no shit). Absolute zero is unobtainable as it violates several physical laws including Heisenberg's uncertainty principle. The point I'm trying to make is that if everything ceased would the passage of time have any real independent existence? Isaac Newton said yes; time is an independent entity which can be divorced from causal events. Whether thought this way because of his scientific understanding of nature or whether he thought this way as a consequence of his deep religious views and interest in mysticism is impossible for us to decide.


I wrote a piece on entropy a while back where I raised the notion that time is no more than a measure of increasing disorder in the universe. But it seems to me that this argument is in some sense a cop out. Am I simply adding an arbitrary feature to the already well understood concept of entropy? Surely the concept of entropy has a name, why confuse the issue by calling it something else? Are we not just juggling with semantics and adding another layer of complexity and confusion?


Since Einstein we have come to realise that everything is relative. Place a clock in a space craft and whisk it away at close to the speed of light and the on board clock would keep different to time to an identical clock placed in my study. Actually the clock in my study hasn't worked for years but I'm too damn idle to change the battery. Thus it seems that time, and everything else for that matter, is simply a problem of perspective; a relationship to a frame of reference. This is not to say that 'time' does not exist. In fact Einstein believed in the concept of time, but a time married to the universe. His concept of time could only exist within the reference of space-time and could not be divorced and act as an independent entity.


The brain no doubt constructs time as a subjective concept. It imposes a psychological filter in the same way that colour is the brain's interpretation of electromagnetic radiation. It is sobering to consider that an event happening 'now' is already in the past by about a 10th of a second by the time we, as an organism, perceive the event. This is the time taken for the signals of the event to reach our brain and subsequently be processed for us to acknowledge- confusing isn't it?


Like most of the 'Big Questions' which face humanity there are no easy and ready solutions. Which is a damned shame. Our minds are conditioned to understand the concrete world. When we enter the world of the abstract we enter very shaky intellectual territory. Is the notion of time a question which we can legitimately ask without becoming clogged in inconsistency and frank absurdity? With our level of understanding can it really be a scientific question? Perhaps the realm of time is best left to philosophers who ponder time under the category of metaphysics. Is time a matter for ontology (philosophy of existence) ? Or am I spouting total and unrelenting bollocks? Gentle readers, let me know what you think.
Posted by Flaxen Saxon at 20:01