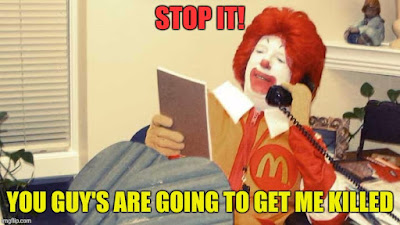 O woe is us
Breaking news from the inter-webby type thing. In response to the wave of suspicious clowns sweeping the nation, MacDonald's, purveyors of tasty comestibles (?surely some mistake), have decided at an historic/histrionic board meeting to place their iconic mascot, 'Ronald MacDonald' on hold. No longer will the breathtakingly inane clown take to the highways and byways promoting the company's extensive repertoire of succulent sweetmeats.


Amid concerns
People who talk loudly in restaurants predict that this momentous event precedes the much sort after apocalypse. Soon the earth will gape asunder and the dead, and not very well, will walk the earth looking for succour in a world groaning under an unrelenting miasma.


Shagger waits for the call
If MacDonald's had used a vicious ferret rather than a dozy clown none of this calamity would have occurred. And the good folk of the civilised nations would not be labouring under the indignity of a world bereft of its favourite fast food buffoon. I even suggested a name for the talisman ferret, 'Shagger'. O foolish CEO!


Guess who forgot to pick up his prescription from the pharmacy?
The event was predicted by the 16th century seer, Nostradamus. Read the following quatrain and all will become manifest and clear. It will be as if two well grilled patties (onion rings, optional) have been lifted from your eyes.


When clowns walk the earth
Ronald MacDonald will take a break
Lo the fast food giant will be led by a ferret called, Shagger (possibly)
The burgers will still taste crap though