Halloween at the Flaxen estate 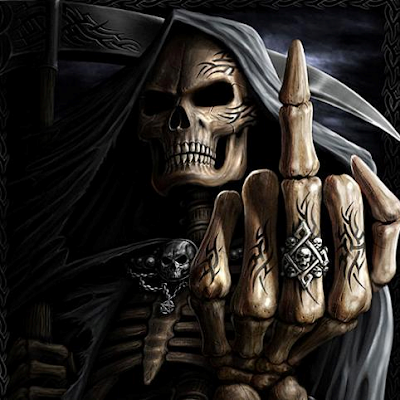 Tis Halloween, or All Hallows Eve, again. Some vague semi-religious Christian/Pagan festival hijacked by omniscient commercial powers. And yes I have a issue with trick or treating: a thinly veiled threat of demanding money with menaces. Any snot nosed kid(s) coming to the Saxon stronghold will receive no lollies mainly because I'm a miserable curmudgeon of a bastard. As I live in a nice middle-class neighbourhood the parents come along as well and stand at the top of the drive as their little darlings knock and attempt to see through the frosted glass. I can't hear them as I'm in my study listening to Wagner at full blast. Generally I'm dressed as a Valkyrie. The breast plate has an extension to allow for my third nipple. Otherwise it would chafe something awful- nuff said.

﻿﻿
I managed to move my saggy, ragged arse, out for a Halloween Barbeque with the family at the weekend. I even got into the party atmosphere and dressed up as the grim reaper. Above I'm posing with  one of my legitimate offspring. I think I might have a mulatto kid somewhere. The family doesn't talk about it. For you nosy buggers who would like to know what I look like, then cast a glance at my son's visage. Although I confess, I'm a bit prettier. If you look carefully at the mirrored mask you might even catch a fleeting twinkle in my one good eye. Although no longer a young man, I'm still a magnificent specimen of manhood- women have been known to swoon in my presence. No doubt Dioclese will back up my assertion as he had the singular honour of meeting the man/god a couple of years ago. I even introduced him to my coterie of ferrets. As a mark of respect, the good ferret, Shagger, managed to rustle up a kiwi from the bush and drop the still twitching, blood bestrewn, form at Dioclese's feet. O we did chortle. Anyway, back to this Halloween thingy- its all a load of bollocks, isn't it?