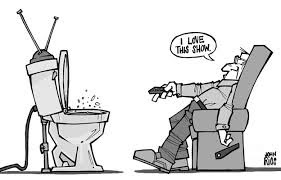 My good mate and fellow blogger, Dioclese,  ran a piece about the dire state of the televisual fare on offer these days. Frankly, I rarely watch tele, although I pay for Sky at the behest of other family members. My daughter and granddaughter are resident at the moment and I'm an indulgent father and grandfather. The Disney channel is transcendent during the day and the 'Cooking Channel' rules at night. There is at least a 100 channels and generally you would be hard pressed to find anything worth watching. Also, New Zealand programming has the endearing habit of introducing adverts every six minutes. Therefore we have dross being perpetually interrupted with shite. If there is something I particularly want to see I record it and watch when no one else is around. The occasions are becoming rare. I had the misfortune of being forced to watch a programme of unimaginable banality and inanity that it goaded me to burn Buddhist monks. My karma had become almost non-existent that only propelling a religious, shaven headed, saffron be-cloaked man into the next reincarnation would suffice to resurrect my soul and humanity. You may well ask why didn't I simply leave the room and ensconce myself in a place of contemplation and quietude. This is why I stayed: it was evening meal time and probably the only time the whole family congregates together in one place to ignore each other. So I spent an agonising and self soul hammering twenty minutes watching an abomination called: 'RuPaul's All Stars Drag Race'. RuPaul is a famous American drag queen and definitely looks better as a woman than a man. I don't care how people express themselves, it is of no interest to me and I'm not one to cast moral censure. Believe me when I say I have lived a very full life and have lived by the maxim: 'Try everything once, except incest and country dancing'. To be honest, there are quite a few things I haven't done but I didn't want to break the flow of a pithy and witty utterance. The thrust of the concept is about RuPaul mentoring and judging a collection of 'Drag Queens' as they undertake a series of tasks and challenges. They compete amongst themselves and every week one is eliminated to a chorus of histrionics. We have seen this crap in a thousand guises and it is standard reality show fare. It is the natural culmination of the 'Reality Tele Trend' and it is difficult to imagine how the genre will be able to continue, as surely all reality options have been used. Mayhap we will be exposed to single mother midgets, pole dancing. Don't forget you heard it hear first. To be honest, I wouldn't mind if they were fit...... I quickly finished my meal and abruptly retreated to my inner sanctum where I could commune with the only friends I have, books and the internet. The Western world has entered its last cycle of societal decay. Reality television is the hand maiden of decadence. My fervent hope is that I'll be dead before the full culmination of Western crapulence comes to pass.  Anyway, I've decided to take up arson as a hobby, although those in the fraternity like to call adherents, 'Thermally Enabled'. Go tell it to 'The Grauniad'. So to soothe a troubled brow and mind, watch this. I'm married to the one in the middle, honestly.