In the office of the 'Head Estate Agent', Mr Ferrettamer III.

"Well Flaxen, I think you have a had a good start, a few minor quibbles aside. On the positive side, most vendors like your no nonsense practical approach to problem solving and your negotiating skills are second to none. On the debit side, not all the people viewing your properties get to go home. It appears that up to 1in 3 of the 'viewers' completely vanish off the face of the earth. Your explanation that they have simply fallen through a rent in the space-time continuum seems plausible. Miss Scrotybottom says she is enjoying her recently acquired 2 bed bijou basenette type feature property with engaging views across the adjacent sewerage works which you sold to her last Friday but is completely nonplussed by the locked room with runes scraped in blood on the door. I engaged Professor Mugumbo from the University of West Tipton and he had this to say, and I quote: "We have a very interesting series of West Saxon runes. Although they seem subject to insular affectation, the meaning is very clear to me. In essence it reads- "None shall enter here. This room contains the remains of two score of my fallen enemy, not including the succulent bits devoured by my trusty wolf, Loki". Well Flaxen, can you throw any light on the situation. An explanation relying on esoteric physics will simply not do".


Flaxen, resplendent in his byrnie of brass and iron regarded Mr Ferrettamer with his single, baleful, blue eye and retorted thusly: "Who dares question the affairs of Flaxen, king of the Tipton Saxons. Impudent wretch! I will gather my war band and burn his garth to the ground. All shall perish by the sword, Arse, big Fat Arse, Biter. None shall escape my wrath!"


"Or perhaps you could go round to the house and furnish Miss Scrotybottom with a key to the room."


"I'll pop down there later today after reviewing the contract for Mr Pindleberry's property and after my 3 o'clock viewing of 2 Winston Terrace......"


At that moment, Loki the Maltese Terrier, emitted a low growl and pounced on Ferrettamer's ankles. He tried to shake off the tenacious terrier, but to no avail. Finally, in frank despair and desperation he reached for the marble paperweight ubiquitously poised upon his leatherette feature desk. He raised the figurine, a tasteful rendition of Michelangelo's David, although some critics gave it a severe panning for not bringing out the quintessential boldness of the original piece, difficulties of working with the medium and the problem of blending texture and light, notwithstanding. Also the cock was deemed overlarge, rampant and inconsistent with the original due to the absence of a prepuce. I've digressed. Ferrettamer was poised to bring down the aforementioned paperweight upon the skull of the persistent beast, when......As if in a drunken reverie, Flaxen reached for his Danish double headed war axe, Twat Cruncher and with one mighty blow, split Ferrettamer in twain, from breastbone to coccyx. The pieces toppled to the floor and Loki immediately grasped the lighter of the two supine torsos and began to crunch on an exposed lumbar vertebrae with unrestrained relish. 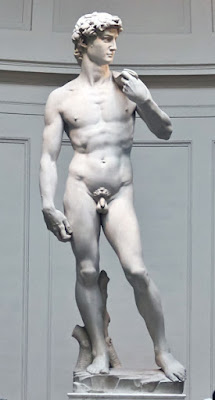 Next week, Flaxen loses his car keys and has to catch the bus.
Posted by Flaxen Saxon at 19:23