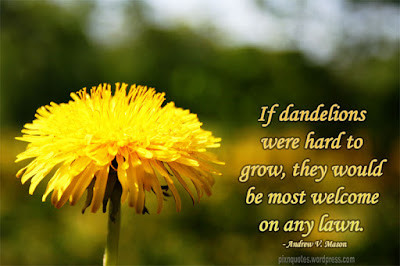 The world of acadaemia and research can be a funny old place and is not part of real life. I once spent three idyllic years researching dandelions. Endless summer afternoons spent on the Sussex Downs looking for and collecting various sub-species of Taraxicum Officinale. Dandelions are fascinating plants and incredibly diverse. As a distraction I used to take specimens to my Professor for classification. He was the acknowledged expert in the field of Dandelion research and a very wise old fella. Anyway, I would hand over my specimen and he would promptly state the sub-species to which it belonged. I was mightily impressed and decided to test my mentor's powers and sanity level. Later that day I handed over the same specimen and without a moments delay he pontificated anew, but this time assigned my specimen to a completely different sub-species- mad as a bucket of frogs in vinegar, but very smart. Once, as an undergrad, I turned up to his office for a tutorial and was told that he couldn't take the tutorial today as he was very drunk; only in the hallowed halls of acadaemia!


Actually my research wasn't as daft as you might think. I was trying to isolate a gene in Dandelions that imparts the trait of asexuality. If transferred into crop species it could prove useful in fixing desirable traits and enabling the crop to be sex free. Like us, all plants desire to be unchained from the sexual prerogative. Not all research projects have an obvious application. In fact much of research advances the lot of humanity not a jot. You could argue that research should not only be about making the everlasting light bulb or finding the elixir of immortality. Knowledge is something we should revel in for its own sake. Much of mathematics is like this and confers no discernable benefit to humankind. Once in a while though, we come across a research topic so bizarre and weird that it provokes derision and negative comment even amongst acadaemics. Here is a short selection for you Sunday afternoon distraction.


Flatulence- A self defence mechanism
In 1996, Mara Sidoli explored the role of excessive flatulence as a defence strategy. In “Farting as a defence against unspeakable dread,” Sidoli outlined the sad case of an orphan who used farting to envelope himself in a protective miasma of smell, in what Sidoli described as a 'defensive olfactive container'. The technique proved very effective and the poor boy was unable to forge relationships and remained friendless.

Sore Winky
Actually this paper has a very practical application as it concerns the best way to untangle the foreskin trapped in a zipper. Most men, at least those in a possession of a prepuce, have trapped their tender parts in a zipper at some time. The experience can be best described as being transported to another world- a world of pain. It probably comes as no surprise, that Dr Chandra Mishra et al, in their ground breaking research paper: 'Safe and painless manipulation of penile zipper entrapment ', concluded that the best technique involves the judicious application of a wire cutter. The flamethrower method was completely ruled out. This should provide comfort for the poor unfortunates who end up at their local A&E.

I Love My Robot
'Intimate Relationships With Artificial Partners'. Dr Levy gained his PhD researching the vexed relationship between humans and robots. He reckons, that by 2050, we will all be having casual sex with robots. At least you wont have to worry about contraception and the robot should have plenty of lube.


Suicide and Country Music
Country music is a very popular music genre in the Southern states of . In, 'The Effect of Country Music on Suicide' the authors explore the link between suicide and country music. They found a positive correlation between country music and suicide rates. Be careful when it comes to correlation. Correlation does not necessary relate to causation- go tell it to the Great British Empiricist, David Hume. Although in this case I'm inclined to concur with the author's conclusion. 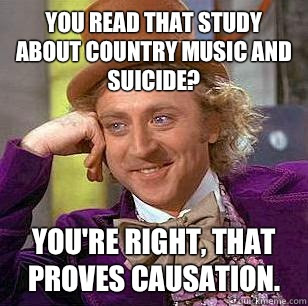 Unicorns
'The Possibility of Unicorns: Kripke v Dummett'. This research extends previous research in this very important area. The conclusion? Unicorns do not exist in reality, although the author admits that they may exist in an alternative reality. This alternative reality is not explained and will forever remained veiled in mystery and irrational bollocks.......


Ain't the world a funny place.


The effects of cocaine on bees


The nature of navel lint


The rectal route to curing hiccups


Enjoy the rest of your weekend. Arse.
Posted by Flaxen Saxon at 18:03