I've been married a while (31 years). How my poor wife has put up with my quirky ways, my many whims and eccentricities over the years, I shall never know. When we married I was still a post-graduate student engaged in valuable research into the mysteries of Taraxacum officinale so money was tight and the wedding had to be organised on a budget. We chose our photographer from an advertisement in the local paper, 'The Tipton Bugle incorporating Smethwick West and associated Hinterlands'. The fellow charged the princely sum of £10 which seemed an absolute bargain. On the day he turned up with his wife in tow. He had a very modest looking camera but his missus was sporting a very impressive single reflex model. As the day progressed numerous photos were taken. The happy couple in various poses with family and friends. I couldn't help notice that all the photos were taken with the cheap camera and the impressive camera hanging around the neck of the photographer's wife seemed to play no part in the procedure. In fact it was never used at all. Most curious.

Two weeks later the wedding photos arrived. A motley collection indeed. Some at jaunty angles. Many were too dark and most were not in focus. O calamity! Lucky for us, my wife's brother in law had taken lots of pictures and they proved to be of high quality- thus the day was saved, hoorah!
For today's entertainment I've trawled, nay scoured, the 'netty' looking for amusing wedding piccys. Not so much as bad photography but poor backdrop, poor taste and inappropriate attire. Read and weep.


Shakira at the first Gypo wedding of the season....... 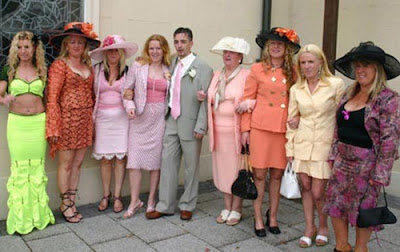 The expression of the Bride's father says it all. Well at least she saved on the expense of a wedding dress. 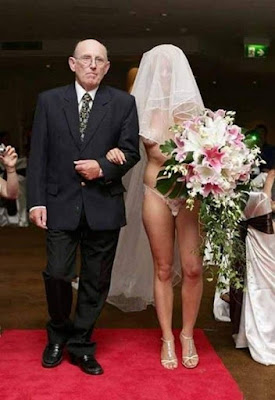 I told them not to invite 'Stinky Eric'. Give him vodka after midnight and he turns into a prince, trust me
﻿﻿﻿ 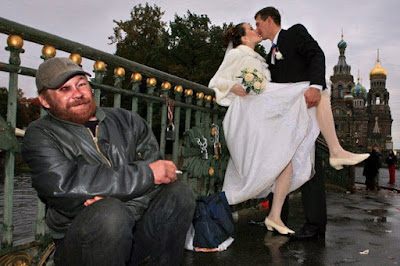 Shit on a stick, these gels know how to have a good time. I wonder which one will end up with 'Stinky Eric'. Er I'm betting tis the one who loses the power of binocular vision- all three then 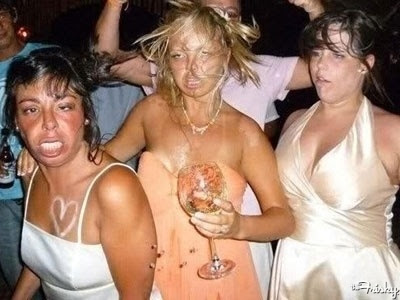 Let us drink to the happy couple. If I were the groom I'd be drinking, a lot. That is definitely a ten pint woman, if that what she be. 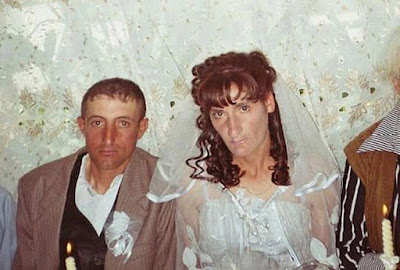 Arrgh, arrgh, my beautiful blue eyes. I've kept the image small so as not to overload the senses. Not so much a dress, more of a self contained ecosystem complete/replete with species previously unknown to man. I'm guessing that the ladies featuring in picture one of this sequence somehow belong to this bride, Shakira inclusive

To finish, I propose a soothing salve to calm the beating breast. Listen, be still and let calm thoughts wash over you..........