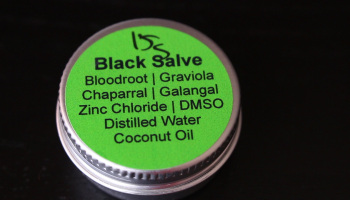 Regular readers of my eclectic mix will have noticed that I'm not a fan of so called 'alternative medicine'. Some may argue what harm does it do? I admit most alternative therapies are not only useless but harmless as well. I would consider the likes of aromatherapy and homeopathy within this category. Although not harmful in themselves they can cause harm indirectly especially if the patient delays seeking conventional therapies due to a misguided therapeutic trust in the alternative therapy. Steve Jobs is a sad example of the indirect harm caused by seeking non-standard therapies. Job's pancreatic cancer was a rare type with a high cure rate given conventional medical treatments. However, in his wisdom, Steve Jobs initially underwent alternative forms of therapy which were totally ineffectual. When he eventually decided to pursue a more conventional medical course it was too late as the cancer had already spread. The penalty for hubris is death.

Black salve is derived from a plant innocuously called ‘black root’. The extract of the root is often mixed with zinc chloride to form a black paste reminiscent of black olive tapenade (ya poncy git, Flaxen). If you Google ‘black salve’ you will come across a number of ‘alternative therapy' websites willing to sell you the compound. Alarmingly, folk are urged to use the salve to treat a variety of skin cancers such as basal cell carcinoma. Tis bad enough that it is being peddled to treat this rather indolent skin cancer but some advocates are suggesting that it is efficacious in treating the aggressive and early metastasising cancer, melanoma. Even more alarming, is that the salve is often advertised as a cancer cell specific treatment which actively seeks out cancer cells sparing normal tissue. This is certainly not the case. Black salve is a corrosive compound which kills any tissue it comes into contact. It is not selective in the type of cell it destroys and neither does it ‘seek’ out malignant cells. Unlike conventional chemotherapy it is totally ineffective against cancer which has spread and established in other tissue and organ sites.

Desperate folk are not only encouraged to self diagnose skin lesions but they are also exhorted to self treat. The salve is spread as a thick paste upon the skin, covered and left for 24 hours. It is then washed off. Over a course of a few days the affected region delineates into an eschar- a solid plug of necrotic black tissue. Eventually the plug separates leaving an open wound. Depending upon the strength of the salve and the time it is left in contact with the skin, the depth of destruction will vary. No doubt there are some who are happy with the result and believe their skin cancer has been cured. The problem here is that many haven’t had a diagnosis of skin cancer from a medically qualified practitioner in the first instance and therefore risk treating a benign lesion which is totally innocuous. Consequently they risk horrendous scaring and disfigurement for no medical gain.

I visited a pro black salve website the other day. This site actively promotes the use of the compound and also sells the product. I reviewed the testimonials and comments. Every comment stated how wonderful the salve was and how it cured their skin lesions and cancers etc. I placed a negative comment which drifted into moderation; predictably the comment never appeared on the site.

Alternative medicine practitioners are promoting black salve as the latest wonder treatment and emphasise that it is a natural 'herb' product. The implication of course is that anything natural has got to be good and more effective than synthetic conventional medicines. They forget to mention that the most poisonous chemical known to man, ricin, is plant derived.

I've decided not to attach any pictures of the havoc caused by black salve. A simple Google search will provide numerous images of poor wretches with devastating skin damage caused by this toxic compound. This is something you won’t find on the sites actively promoting the salve. Sadly, the selling of black salve is perfectly legal and anyone can offer medical advice concerning its use. Anyone contemplating using black salve to self treat is advised to think again and urged to consult a suitably qualified medical professional. I can't emphasise enough how deceptively dangerous this compound is.

Below is a video explaining all you need to know. Watch and weep