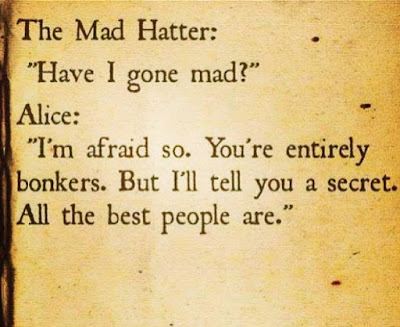 
Last week a young friend and colleague took a couple of days off work due to an anxiety attack. Her doctor diagnosed anxiety and depression. All this surprised me mightily as my young friend appears to have it all. She is smart, funny, gracious, endowed with a wondrous personality and dare I say it, as sexy as hell (steady Flaxen, your wife sometimes reads your blog). She has a good job, home and is married to a man who dotes on every cell in her body. She is the last person I thought to be blighted with a mental health issue.


All this got me a thinking. When I considered my family, colleagues, friends and acquaintances, about 40% are on medication due to mental health issues, mostly depression. Admittedly this is not a valid cross section of society and the numbers are small, but perhaps this is a reasonable reflection of middle-class society?


Depression appears to be a very modern disease and the incidence has grown prodigiously over the past 50 years. An American study estimated that depression is 10 to 20 times more prevalent than 50 years ago. Why should this be the case? Are we more mentally unsound than our parents and grandparents, or is something else at work here?


Certainly our attitude toward mental illness has changed. For my father's and grandparent's generation there was a real stigma attached to mental health. My mother was diagnosed with paranoid schizophrenia when she was 21. Her initial episode was severe necessitating a 6 month stay in a secure mental health facility. Her family was ashamed and indeed my grandmother vehemently denied that my mother had a mental health problem at all! All very strange. Today we are more accepting and no longer treat people with mental health problems as lepers. Some still need locking up though. Could it be that our parents and grandparents had the same rate of mental issues as today but were less likely to come forward for help because of societal pressure? Perhaps this is part of the explanation, but I don't think it is the whole story.


Mayhap modern life is more stressful than in times past. I don't think this the case for most folk in Western society. Our parents and grandparents lived through two horrendous world wars and still kept their sanity. How can events in our modern lives be considered more stressful than the real possibility of being shot or bombed?


Main stream psychiatry does not think that, in the past, mental disorders were under diagnosed. So perhaps the opposite is true. Are mental health issues being over diagnosed? Maybe 'normal behaviour' is being deemed pathological by some psychiatrists. Of course, normal behaviour is a spectrum disorder (surely some mistake?). Are psychiatrists moving the border in an overzealous shift to aid their diagnosis and professional pride?


Is the mighty pharmaceutical industry to blame? This is where it gets interesting. Modern medicine is big bucks. And for every malady, real and imagined, there is a tailor designed pill. Every successful industry must sell their wares, otherwise they wouldn't be successful, would they? - strange tautology, I know.


Pharmaceutical companies aggressively promote their drugs to psychiatrists and the doctors on the front line, General Practitioners; lots of free samples and sales hype. They sponsor conferences and provide funding for professional activities. Doctors are human and like everyone else are influenced by slick professional advertising and promotion. Pharmaceutical companies can be subtle and even subliminal. These tactics work and no doubt work very well. Are doctors being persuaded and even duped to over prescribe? This is a highly complex issue. Doctors are under pressure to actively treat the patients under their care. Drugs often work and fix the underlying symptoms but they don't treat the root cause of the problem. Sorting this out is going to take time and also a lot of money. Behavioural therapy doesn't come cheap.


Some argue that drugs might be great in the short term but in themselves exacerbate mental illness in the long term converting an acute time limited episode into a lingering chronic illness. While it is true that all drugs come with side effects the benefits should always outweigh the negatives. Medication is not always exact and individuals vary in their physiology and metabolism making therapeutic response difficult to predict. We are a long way off the golden ideal of targeted pharmaceuticals to suit everyone's unique disposition.


I have no clear/clean answer, in this case. Complex problems have complex causes. I think we are dealing with a real phenomenon when we look at the modern increase in mental health disorders. However, the causes and the solutions are perhaps beyond our understanding and consequently our resolution.


As I understand it, schizophrenia is a multi-factorial disorder. Many genes are involved which add up and once a threshold has been reached, madness ensues. I'm very much aware that I have a good dose of the predisposing genes. Not enough to tip me over the edge but enough to make my thoughts interesting. Because of this I am blessed with a certain degree of creativity and an askew take on the world and life. The downside is that I can't control or turn off the cascade of random thoughts which constantly assail my mind. Sometimes this can be exhausting. I have been told that there are drugs available which will turn off or at least dampen the cacophony in my head. But if I complied I would lose something quintessential that makes me, 'me'. And this a price I am not prepared to pay.
I'm aware that I have cited no references for my assertions. If anyone is interested I am more than happy to comply.


Bugger! Two sensible posts in a row, perhaps the new medication is starting to kick in after all. Arse.