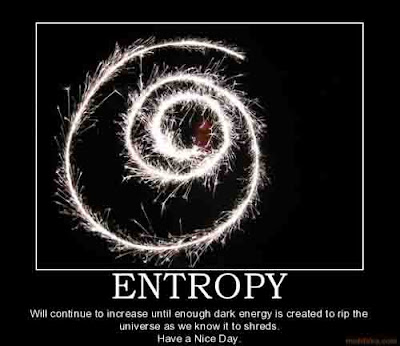 "We expect order in our lives and if we are unlucky we will achieve this, but at what cost?"


Entropy, all is entropy
Some folk confuse entropy with energy. While entropy and energy are interrelated like a first cousin marriage they are not strictly equivalent or sexually compatible, but that's another story.


If we accept that 14.7 billion years ago our current universe burst forth from a cosmic big bang, and most physicists conform to this view, then the initial state could be described as 'low entropy'. In fact this would have represented the lowest entropic state of the universe there has ever been. Since then universal entropy has been steadily increasing. Just as a main spring in a watch slowly uncoils, so the universe 'winds down' to eventually reach a state of stasis and maximum entropy (perhaps not). This will not occur for a very, very, long time, if at all.


But entropy is not just a concept for very clever physicists to ponder upon. We can observe entropy in our every day lives. A dropped glass starts with low entropy however, when it shatters on the floor its entropic state increases. The old state of low entropy is irrevocably lost. While it is not truly impossible to reassemble the component pieces to the original state of low entropy, the energy required to do this would require entropy to increase elsewhere.


Living organisms are a perfect example of how entropy works. Life exists at a constant low entropic state. But this state is unnatural and can only be maintained with a constant injection of energy provided by the dissolution of ingested food, in most animal species, at least. The food items consequently undergo an increase in entropy- there is truly no such thing as a free lunch. Increasing localised order (low entropy) will invariably cause a corresponding increase in entropy somewhere in the universe. Once we die entropy is no longer restrained and consequently runs amok.


Actually disassembly, over time, is not necessarily the only configuration predicted by physical laws. The second thermodynamic law is usually defined in terms of entropy however, it can also be couched in different terms. It is actually a consequence of statistics. There are more (a lot more) disordered states for any system than ordered. Therefore, it is possible that a broken glass could spontaneously coalesce to its original low entropic state without violating the laws of the cosmos although such an occurrence would only occur with an infinitesimal probability. A probability so low as to render it a virtual impossibility.


Could it be that time's arrow is just a manifestation of entropy? Entropy defines change in systems. And if we do not measure the forward march of time in terms of change in our physical world, then how do we measure it? This necessarily encroaches into the philosophical domain. I don't want to consider the 'nature of time' here as it is incredibly convoluted and complex and has occupied the smartest minds for over 2,500 years. Perhaps another post, if I can be bothered.
Entropy should not be taken as a measure of the disorder in my own chaotic life. That takes a lot of energy and work. Mayhap I've achieved an acquired sense of equilibrium. Or as I like to call it: 'A refined state of ignorance and disarray'.


Can't help but notice that this is the fourth 'sensible' post in a row. Either the medication is taking effect or I'm turning into a sensible old scrote (Arse). Take your pick.
Posted by Flaxen Saxon at 18:44