Love and the Single Ferret 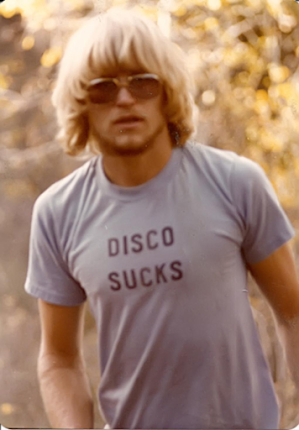 In this post, I'm going 'off script'. Tis, not a topic I would usually contemplate, but I'm in a wistful reflective mood and thus I'm happy to pontificate on stuff I would never likely put to paper. I'm a student of the human condition, otherwise known as a self-absorbed pretentious twat, and I'm curious about how humans interact with each other and what this reveals about our innate biology.

So today, I'm writing about the 'mating game' and particularly with regard to mate selection in the modern world. This is a male-centric view, for which I make no apologies, and as such encompasses my own experiences in the 'Great Game'.

In 1972 I was 16 years of age and just left school. At this stage in my life, my dating experience was zero. Like many of my peers, I was socially awkward and immature. But things were about to change.....  Not too far from where I lived there was a youth club and every Friday night, it would host a 'Disco'. Most of the patrons came from the local High School, situated in a nice middle-class suburb. In contrast, my friends and I hailed from the local council estate and were attracted to the venue in order to meet girls. Just before our first visit, we bought booze from the local off licence and the four of us found a quiet spot where we shared and consumed a bottle of sherry and a few cans of beer. Thus suitably fortified we hit the dance floor. Now we were the interlopers and unknown to the local girls. In contrast, most of the attendees were known to each other and so we were considered a novelty and perhaps a little exotic as we came from the wrong side of the tracks. To our surprise, we proved popular with the local girls and I had a succession of girlfriends in a relatively short time. In fact, during the six months of attendance, I managed to secure five, short-lived and shallow relationships. Of course, this went to my head a tad, and after six months I became bored with dating 16-year-olds and was ready to hit the pubs and clubs. And this is exactly what I did and quickly found that girls in my age bracket (17 years) were completely disinterested and were dating 25-year-olds. This came as a shock and my ego suffered accordingly. As one 17-year-old said to me: "You are cute. Come back in 5 years". I became a tad disenchanted.  My nascent love life had been curtailed. Very quickly, my youthful exuberance, confidence and, perhaps a tad of insipid arrogance, were no more. I had become acutely aware that in the eyes of girls, my age, I was but a callow/shallow youth who lacked a highly desired 'dating trait'- maturity. It was a hard lesson and I became acutely aware that women, especially young women, can be excruciatingly cruel.

And so it came to pass that I gave up on the dating game altogether and it transpired that I would not have a romantic liaison for nearly two years. O, the humiliation of those love sterile years!

As an aside: I always had a thing for redheads. Two ex-girlfriends were of this stripe. However, I ended up marrying a blond, go figure.

Anyway, that's enough about me wittering upon the travails of my incipient love-lorn beginnings. Let me know in the comments whether you have experienced a similar experience concerning love's youthful folly.