Endosymbiotic Theory in all its Glory 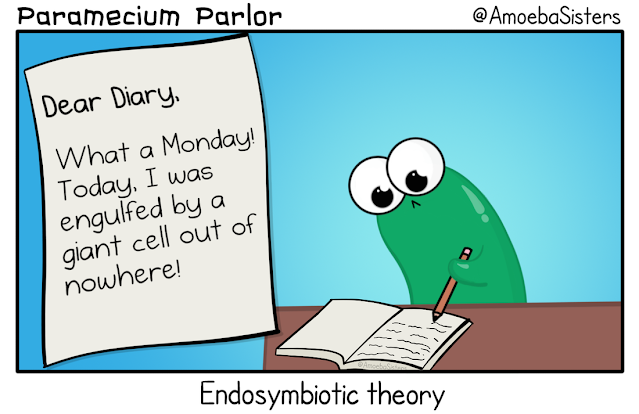 In this post I would like to bring forth for contemplation the, 'Endosymbiotic Theory' first brought to light in the 1960s by a biologist, Lynn Margulis. But before considering the theory in a more depth, I'm required to delve into a little background information for the edification of the soul.

It has been estimated that the Earth is 4.54 billion years old and life appeared perhaps as early as 4.3 billion years ago. First life on Earth would have been very simple, single-celled organisms. Evolution for the next 2.3 billion years would result in a vast array of these relatively primitive, single cells. The bacteria we see today are the direct descendants of these simple cells and are classified as prokaryotes. It would seem that life would have continued along this rather happy-go-lucky, primitive pathway but something wonderful happened which kick-started evolution on a new and exciting trajectory.........

Consider our primitive earth 2 billion years ago. Within the oceans lurked life, but not life as we know it today. Evolution occurred, albeit slowly, and as always modified form and structure; a process in perpetual motion. As previously mentioned, life at this time in our evolutionary history consisted of unicellular organisms without the power to construct complex multicellular structures. Power is the key, or more importantly energy. Energy expenditure is what defines life and distinguishes the world of 'life' from 'non-life'. These simple bacterial forms produced energy by a means known as glycolysis. I'll not go into the cycle itself (many years ago I had to memorise this cycle, and many more. Arse). Suffice to say, that this energy-generating pathway is responsible for keeping entropy at bay. Entropy is a fascinating subject in itself. Energy, if left to its own devices, is always winding down to a lower, less organised state incapable of performing further useful 'work'. Remember, energy can never be destroyed only changed. Energy is the life giving chameleon of our world, and indeed for the entire universe. Have I digressed?

Sometime 2 billion years ago a single bacterial cell engulfed a much smaller bacterium. Tis a bacteria, bacteria eat world. Normally the larger organism would digest the engulfed bacteria thus extracting life-giving nutrients. But for some reason, lost in the eons of time, on this occasion something unique and singular occurred. Instead of destroying the hapless bacterium, the larger cousin, by means and mutations unknown encouraged the reproduction of the organism within its cell. The larger cell then began to nourish and nurture its much smaller brethren. The benefit for the larger cell is that it began to feed on the surplus energy provided by the inclusion. The larger 'host cell', in turn, provided a protective environment for its tenant. The smaller of the two bacteria would eventually evolve into the ubiquitous organelle, mitochondria; also known as 'The Powerhouse of the Cell'. This situation, where both organisms obtain benefit from their intimate association is known in biology as, mutualism. The first 'complex cell' (eukaryote) was formed. The fact that this event happened, only once in life's complex evolutionary history is attested and elaborated by modern genetic analysis. The surfeit of energy enabled the evolutionary development of more complex, interacting/cooperating, multicellular organisms.  It is sobering to reflect that all complex life, including humans, owe an evolutionary debt to this rather aberrant mutated 'mother cell'. This event may have implications for the formation of complex life elsewhere in the universe. Could it be that our inability to contact other intergalactic civilisations is because they don't exist due to this fundamental hurdle on the pathway to complex life?

There is another point to be made. Bacteria reproduce by asexual means. Therefore genetic diversity in these organisms relies on the production of mutations. In contrast, multicellular organisms reproduce sexually. This allows for an increase in genetic variability- the fodder for evolution to digest and work on. Therefore, evolution occurred quite rapidly in these first eukaryotic cells eventually resulting in the plethora of multicellular creatures we see today. It is interesting to note that for 2.3 billion years, life remained single-celled and primitive. Thereafter, with the formation of eukaryotic cells, it took only 2 billion years to produce the vast array of complex life we see today, thus is the evolutionary power of sexual reproduction. Consider the fact that for the majority of the time that life has existed on Earth, the only organisms alive were bacteria.

It seems that in addition to this initial endosymbiotic event, sometime later in evolutionary history, a second engulfing occurred in a cell already playing host to mitochondria (can you actually have two unique events- only on this blog?). Therefore, mitochondria were not the only organelle to make this jump to existence within another cell. These cells would eventually become part of the great, 'plant kingdom' and the inclusion would evolve into the organelle, called chloroplasts. Chloroplasts contain the necessary chemical apparatus for photosynthesis a feature associated with all living plants, with the exception of the parasitic forms.

Both mitochondria and chloroplasts still contain certain primitive elements characteristic of their bacterial ancestors. They retain their own DNA, which is organised in a circular form, just like modern bacteria, and produce their own proteins. Both organelles have also retained the ability to reproduce independently within the 'host' cell in an asexual manner, again this is a trait shared by bacteria.

These incredibly rare evolutionary events are responsible for the rich complexity of life we observe on Earth today. Without these critical associations, life today would be no more complex than a smear on a rock, in the ocean. Makes you thunk, dun it?