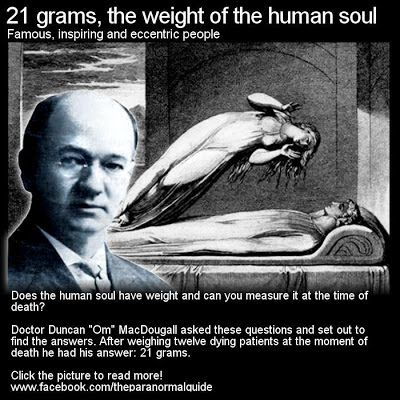 The measure of man?

In 1901 an American Christian physician, Dr. Duncan MacDougal, set out to prove the existence of the soul, experimentally, by weighing patients at the time of death. His rationale revolved around the possibility that the soul had a finite weight that could be measured. At the time of death, the soul would depart and the loss of weight could be recorded.

There is much that can be said about this experiment and none of it is good. To enlightened folk 120 years later, the experiment appears naive and misguided. We need to remember that at this time in history, even well-educated folk, were likely to believe in God. Atheism, as a concept, would only take hold, in the West, after the Great War. What I find particularly strange is the concept of the soul as envisaged by the good doctor. The notion of the soul, in the West, has undergone much change over the past 2,500 + years. It can be traced from its early beginnings in Greek thought (Homeric-pre-Socratic) to a thorough exposition by the great Greek ancient philosophers, Plato and Aristotle. Their concept of the soul heavily influenced philosophers to come ultimately becoming incorporated into  Christianity by the early Church Fathers. Thus our modern idealisation of the soul is essentially 'Ancient Greek' with a modicum of Christian garnish/varnish. Curiously, the theology of the soul as outlined by the ancient Jews did not overly influence the Christian concept. I find this interesting, as of course, much of what we consider 'Christian' has been taken from Judaism (?discuss). I think it would be worthwhile to write on the topic of: 'The Concept of the Soul, in the Western Tradition', at a later juncture. Anyway, for the purpose of this post, it is sufficient to note that the Western concept of the soul has, to the best of my knowledge, always been considered as an ethereal incorporate entity and therefore devoid of mass. As such, it would not be expected to exhibit 'weight' as a constituent property. Therefore, conceptually, MacDougal's experiment was very much at odds with 'theological thought' of the time; very curious indeed.

Clearly, the logistical problems involved were formidable. But this did not deter the doughty, indomitable Dr. Duncan MacDougal as he embarked on designing a foolproof protocol.

Dr. MacDougal managed to obtain six patients on the point of death. He persuaded his moribund patients to lie on a modified bed containing a sensitive scale. At the time of death, Dr. MacDougal noted any change in the patient's weight. His conclusion: the weight of the soul is equivalent to 21gms. However, this result was obtained from only four of his dying patients and the data obtained was inconsistent.

This experiment has been cited by Christian groups as scientifically proving the existence of a soul even though the experiment assumes and implies that the soul has a physical manifestation, counter to mainstream Christian doctrine. The good doc repeated his experiment on fifteen dogs. In this instance, there was no loss in weight at the time of death. Dr. MacDougal considered this result in accord with current Christian doctrine. Only humans were exalted enough to be worthy of a soul. All other living organisms, and inanimate objects, were bereft. There is no mention of how the canines expired. I can only surmise that the 'good doc' helped the dogs to relinquish their grasp on existence with a little morphia.

There is so much wrong with MacDougal's experiment that it is difficult to know where to start, although he did manage to get his findings published in a respectable medical Journal (American Medicine 1907). Criticism was leveled soon after publication and very few scientists and physicians considered MacDougal's findings valid. Ultamately only four patents provided data in this study. This is a ridiculously small sample set to base such wide-sweeping conclusions and it is impossible to perform any credible statistical analysis. On this basis alone the experiment can be disregarded. It is only recently that we have developed techniques to define and measure the precise time of death. The criteria used by MacDougal to determine the exact time of death was considered flawed and imprecise. It has also been argued that the means to weigh the patients was not accurate and only precise to 5gms. At the time of publication a prominent American physician, Dr Augustus Clarke, proferred a more probable cause of weight loss following death. He stated that at the time of death there is usually a sudden rise in body temperature causing an increase in sweating resulting in water loss. As dogs have no sweat glands they would not exhibit a corresponding loss in fluid at death.

I see no need to belabour the point. Although a small group of fundamentalists might be convinced, the vast majority of serious scientists, and lay folk alike, remain unconvinced. As far as I'm aware there has been no subsequent attempt to repeat the experiment, on human subjects at least. Given the immense logistical (and ethical?) hurdles involved, it will come as no surprise. And frankly, serious physicians, and scientists, have better things to occupy their research time and budget.

As a passing sentiment, I will leave my faithful readership with the following prose.

My Soul. I summon to the winding ancient stair;

Set all your mind upon the steep ascent,

Upon the broken, crumbling battlement,

Upon the breathless starlit air,

Upon the star that marks the hidden pole;

Fix every wandering thought upon

That quarter where all thought is done:

Who can distinguish darkness from the soul?