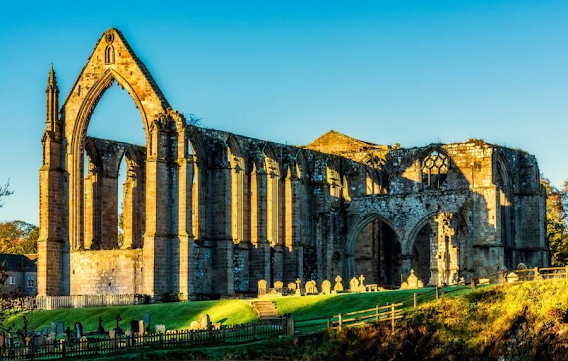 I would like to ask my readers a question? Where and what would you consider the most dangerous stretch of water in the world? It could be the sea off seal island in South Africa; perhaps Niagara Falls; mayhap the waters off Cape Horn. I'm sure the good folk who read this blog can think of other areas of water that would qualify. And yes, the examples I have cited can be exceedingly perilous. Many, foolhardy and unlucky souls have gone to a watery grave at these sites. In the case of seal Island, the unwary have become an integral part of the food chain. However, dangerous as these places can be I would like to suggest a stretch of water called 'The Strid' as the main contender. The Strid is a small section of the river Wharfe situated in Yorkshire in North England. It flows past a ruined 12th century Abbey, called 'Bolton Abbey'. I have visited the region and walked through the Abbey. It must have been majestic in its time and still invites awe even in such a jaded old scrote as myself. I have also visited the infamous 'Strid', a stones throw away (arse). When I was there the water was not in full spate and looked curiously inviting. At this point the river narrows to just under six feet, and herein lies the problem.

Just upstream from the Strid the Wharfe is a sedate gentle river about 30 feet wide. A little downstream the river and the water contained within is forced into the narrow channel of the Strid. Although the surface of this stretch looks calm, just under the meandering stream lies a deep abyss. The water under the tranquil surface is violent and fathomless. Strong currents and eddies belie the river's calm exterior. At this point the waters flow deep and the roiling, tumultuous waters have cut deep chasms/caverns into the limestone, undermining both banks. This has resulted in the formation of numerous caves and tunnels. Due to the violence of the underlying waters these formations can not be explored by man or instrumentation.

It is said that the son of a prominent Lady of the area died in the Strid in the 12th century and so in order that the soul of the young departed son could be prayed for, the distraught Lady donated the lands to the church. Wordsworth was so moved by the area that he penned a poem: 'The Force of Prayer'. Wordsworth included in his prose the mishap of the young fella from yore, surnamed Romilly.  I haven't included the whole poem. Here is a representative stanza. In my opinion, the poem is not Wordsworth's best work.

“And what may now forbid
That he, perhaps .for the hundredth time,
Shall bound across THE STRID?
He sprang in glee, – for what cared he
That the river was strong, and the rocks were steep?…
The Boy is in the arms of Wharf,
And strangled by a merciless force;
For never more was young Romilly seen
Till he rose a lifeless corpse.”
The problem: when the river is calm it seems deceptively 'safe'. At its narrowest point it possible to leap from one side to the other. The rocky banks are slippery and slick with algae and a wrong move results in certain death. To date, no one has survived a dip in this stretch of the river. In 1998 a honeymoon couple died whilst walking along the bank. Rain upstream caused the Strid to rise over five feet in just a minute and both were swept into the yarning maul of the Strid. In 2010 a boy was lost when he slipped on the river bank.
Although their are warning notices along the river bank, folk seem lured to the spot. Unsuspecting tourists find it difficult to comprehend that this 'babbling brook' is dangerous. It looks so benign, serene and hypnotic..... Do not tarry too long and stare deep into its limpid depths.
Bodies don't always reappear. A few may surface downstream, hours, days, months or even years later. But it seems the Strid is reluctant to release all its prizes. Many are never seen again and lurk deep within its cavernous, tortuous depths. They hang like ragged trophies with their bony hands outstretched toward a domain they will never reach. 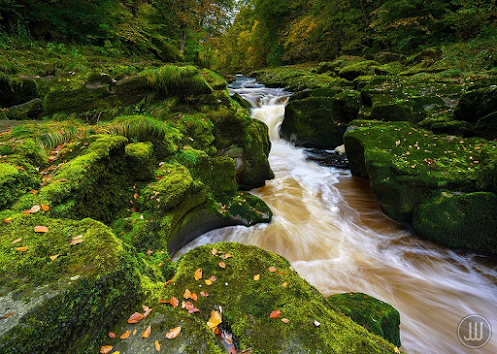 It looks so peaceful and benign