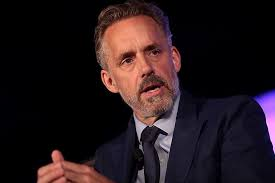 Unless you have been living, sequestered in the bubble, aptly named, 'The  Bubble of Tipton', you must of heard of the phenomenon, pertinently termed, Prof. Jordan Peterson. Said Prof. became foisted upon a none sequestered/cloistered populous several years ago due to contention. Read on and weep, or applaud, depending upon your psychological and/or political status.

Professor Jordan Peterson burst upon popular consciousness after upsetting, 'the usual suspects' during a lively debate concerning, 'Gender Issues'. Jordan is an academic at the University of Toronto. He teaches and researches in the arena of human psychology and in this regard he describes himself as a 'scientist'. In addition, he maintains a clinical psychology practice and has been active on various social media platforms, including YouTube since 2016. In particular, Peterson gained notoriety due to his stance against a particularly pernicious piece of potential Canadian legislation, that if passed, could result in prosecution for those unwilling to express an individual's preferred gender pronoun. He rightly objected due to the proposal's anti-free speech connotations. He does not support judicial interference in matters of conscience especially when it criminalises freedom of thought and speech. This is an anathema to any right thinking individual.

Needless to say, the good Prof. expresses views counter to the madness that infects the extreme left. Since the encounter, the 'The Vocal Left' have  raged at Peterson to the point of hysteria. As always, they endeavour to deny free expression to those who do not embrace their overarching leftist narrative. This strident minority have declared Peterson to be a 'fascist' and therefore a man that should be denied a public platform. They will not countenance any viewpoint counter to their dogged dogma. They are not interested in a free exchange of ideas or healthy debate. They seek to withhold debate and a free exchange of ideas to those who do not suckle at the teat of 'leftist insanity/inanity' (steady Flaxen: take heed and ingest another blue-green pill).

Since 'the controversy' he has become an academic celebrity thrust upon the collective public consciousness and consequently basks in the intellectual limelight so afforded. He is either adored or abhorred depending upon political agenda and ideology. The 'good Prof.' is a skilled and thoughtful debater. I exhort my readership to listen to his pontifications, both in the academic classroom and in public forums. He is an engaging speaker and especially erudite in the area of human psychology. Prof. Peterson has a self proclaimed IQ of 150. If this is the case he belongs to an extremely rare intellectual elite as only 0.2% of the population are so endowed. He is not a modest man. Modesty is only a virtue in those with modest gifts. Generally I am not impressed with self professed IQ bandying. In this respect I'm not a fan of the high IQ club, MENSA. It serves little purpose and is clearly a vehicle for self aggrandisement; a mutual backslapping exercise of no import. The association does no more than bring together folks with a high IQ, other than that they have nothing in common, except an over inflated ego. As far as I'm aware, Peterson is not a member of MENSA, to his credit. His self proclaimed 'genius level IQ' is a demerit to his character, but in Peterson's case, not a serious one.

Peterson has garnered significant media attention and coverage. As to be expected he has become the darling of the right. Indeed, he has achieved something of a 'cult' status in some quarters. At the end of the other political spectrum, predictably, Peterson has attracted extreme criticism. He has been described as 'right wing' and dangerous. A bemused Peterson denies any 'right wing' credentials and describes himself as a 'Classic British Liberal'. Personally, I think Peterson can be described as a conservative, but there is nothing in his speech or writings to support that he has 'right wing' leanings.

His religious stance is rather confusing and paradoxical, to some. When asked if he believes in god his answer is ingenious. I don't have the space to discuss his response here, because of its complexity- mayhap in a follow up post? He professes to live his life as if god does exist, but  Peterson is not a Christian. If true, this is highly commendable.

On matters pertinent to his profession he has much to say that makes good sense and his commentary is backed up with solid scholarship. Peterson also makes forays outside his 'areas of expertise'. He is a widely read man and his views on topics sundry are always thought provoking. On matters pertaining to religion and social matters, I confess that I'm in general accord. He has much to say with regard to the ongoing 'IQ debate'. This is a highly controversial topic and some folk reckon it should be left alone without further discussion. I am not of this ilk, Peterson's views are well known and I find myself in total agreement. There are aspects of his 'philosophy' that I do not agree with. He admits he has been heavily influenced by the works of Jung. Jung was a one time student of Sigmund Freud but fell from the fold and developed a philosophy/psychology of his own. Peterson clearly admires Jung almost to point of 'Hero Worship'. In my opinion most of what Jung wrote is mystical nonsense and like much of Freud's work disregarded today. Peterson accepts a lot of Jung's principles and work without critical comment. Although I'm not a fan of Jung, I have a healthy regard for his intellect which was substantial. This is where Jordan leaves the 'World of Science' and enters into a morass of confusion and contradiction. Jung's work was not scientific in any modern accepted sense. His psychology owes much to pure philosophy than it does to psychology. Jung was fascinated with esoteric mystical writings from the East and incorporated a wad of inscrutable 'Eastern Wisdom' in his work as well as spiritualism. Although, I find myself in disagreement with Peterson's, Jungian leanings, I find his commentary on the matter, very fascinating and worthy of serious contemplation; Peterson is no fool. I know that my comment on Jung is simplicity itself, and Jung was not a simple man. His works are well worth a read although they are a difficult read. He writes like me (at least in this blog) and therefore can seem obscure if you don't read him right.

In conclusion, Peterson is a highly polarising academic and intellectual. He has been described as the leading 'Western intellectual of his generation'. A sentiment I'm in agreement with. It is easy to express numerous superlatives when considering the man and his work. Is he a modern Western hero? I will leave my readers to decide. I will say this: I greatly admire Peterson. His moral and ethical stance is difficult to fault. His scholarship is voluminous and exceeding interesting and important. Much of what he says is worthy of consideration. Even if you disagree with many of his pronouncements and written work, as I do, he is always thought provoking leaving the audience with their minds enlivened, refreshed and full of exciting novel ideas. Peterson is a debater without peer. Woe to the contender who does not prepare for the intellectual bombard of Peterson's exquisite wit and beam of intellect. I always enjoy what Peterson has to say and I admit I'm a commited fan but not an uncritical acolyte.