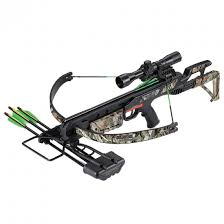 May the Gods who oversee this type of thing, forgive me- for I shall receive no redemption from the traditional archery fraternity. Read on and weep.
The other day I purchased a recurve crossbow with a draw weight of 175lbs. I used to own a crossbow many years ago when my hair was like spun gold and without the silver admix which adorns my crown these days. Crossbows have certainly changed in the intervening years. As I recall my old bow was heavier to heft and not too powerful and was easily cocked by hand alone. Modern crossbows weigh in at less than 5lbs and require a cocking device for spanning. The bow is cocked by means of a rope device with pulleys. In this way, I gain a mechanical advantage which reduces the draw weight by 50%.

I confess I’m not a bow snob. There are archers out in the big wide world whose austerity is unbending and declare that traditional barebow shooting is the only type of archery worthy of the name. They have a healthy disregard and disdain for those who adorn their bows with sights, stabilising rods, and other attachments designed to increase accuracy. The greatest venom occurs between the English longbow crowd and shooters of compound bows. I’m always surprised at the degree of hate exchanged between these fellow archers, although, the exchanges between the two camps can be highly amusing. Of course, not all English longbow adherents are so strident in their condemnation. I suspect most archers are none too bothered. However, there is a hardcore cadre who are driven to express their righteous ire at fellow archers. They consider the practice and mastery of primitive archery to represent the purest exposition of the craft.

I’ve always been of the opinion that archery is a recreational sport to be enjoyed by all regardless of the type of bow used. At last count, I have a healthy collection of 25 bows not including the crossbow. Of these, two represent English longbows. I also own a dozen or so Asiatic horse bows; a native American bow and an assortment of modern recurves. And yes, I own a compound bow, much to the chagrin of traditionalist fellow shooters. The adornment with sights, clickers, stabilisers, and other aids to accuracy are considered to detract from the archer’s skill. Archery, at all levels and irrespective of type, requires a high degree of skill if consistency is to be desired. In defense of the compound and modern, ‘Olympic’ style recurves: these bows are designed to shoot with a high degree of accuracy at 70 and even 90 metres. Generally, even with the most skilled exponent of the art, comparable accuracy is only achievable within the range of 40 metres or less with a traditional bow. Each archery form and bow style has its own pleasures and challenges. I can swap my bow and archery technique according to mood and caprice. The true flight of the feathered shaft finds its mark whether my bow is a simple ‘staff’ of wood or a complex amalgam of pulleys, cams, and fibre glass limbs.

Crossbow shooters accrue the collective displeasure from, albeit a minority, of other archery groups. I’m at a loss as to why this animosity exists. While it is true that very little skill is required in crossbow archery and great accuracy is easy to achieve even after minimal acquaintance with the bow. Perhaps this is where the problem lies. Also, amongst English longbow shooters there is a historical enmity, long fostered, and ingrained into the heart of every true Englishman..... But times change and we must embrace the crossbow as if a long lost brother has suddenly returned to the fold. Not a full blood brother and mayhap from the distaff side. You know the half brother with the wonky eye and the limp/gimp. The brother who is none too bright and tends to sport egg stains on his cheap, tacky shirt. Nuff said. Arrrssseee.
Posted by Flaxen Saxon at 15:25