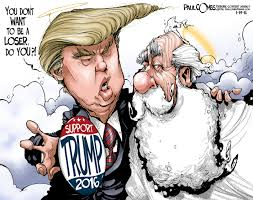 I was scouring the medium called YouTube the other day, as is my wont, and for sundry reasons that remain unfathomable and mayhap, unaccountable, even unto myself. During my sojourn, I was proffered, unbidden, topics akimbo concerning Angels (the celestial ones), Heaven, and Hell, but not necessarily in that order. More specifically the vids were about folk who claim to have experienced, Angels/Heaven/Hell and were keen to share, nay unyoke their burden, on an agog and unassuming populace. Interestingly, a subset of authors claimed to have spoken with Angels/God/Jesus who collectively prophesied a Trump win in the upcoming US elections - how quaint. The implication, of course, is that the heavenly residents are staunch supporters of Trump and his overarching policy to make America great, again. Has anyone bothered to solicit/elicit the political opinion of God's arch-nemesis, The Devil/Satan?  A quick glance at the comment section showed that the majority of the commentators accepted the video's content as verity itself. Perhaps God, in all his wisdom, is trying to influence the election? Of course, he could just wave a magic wand and not bother with the electoral process at all: memo to God.

God and his minion's concern for worldly, mundane matters is somewhat surprising. I also noticed that the content creators had attracted a large number of views- mostly in the millions. Far be it for the flaxen-haired one to suggest that the whole drive of the enterprise is a crass and unwholesome exercise to garner much gelt from the advertisers. Tis a pretty penny when you attract 3 million views. But then I've always been a cynical and suspicious old scrote. Nuff said.