This is for my Uncle Charlie. May he rest in pieces 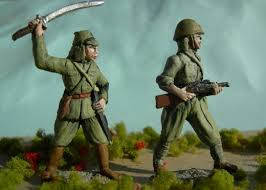 Welcome to the 75th annual West Midland Japanese Sniper Convention. This year’s prestigious event is held in the beautiful picturesque town of ‘Tipton on Detritus’. Tipton, the ‘Beirut of the North’, moistly suppurates in the vale of the ‘Birmingham to Dudley’ Canal’. How appropriate then that this illustrious event should transpire in the town which remained a hub of Japanese sniper activity throughout the Second World War


Opening Address 11.30pm – 12.30pm
The proceedings will be kicked off by an inaugural address by Emperor Hirohito’s grandson, Kendo Nagasaki. Kendo will reflect upon his grandfather’s love of ukiyo-e art and pride of being a war criminal. This will be followed by a light-hearted whimsical re-enactment, in mime, of the ‘Rape of Nanking – Special Bayonet Edition’.
Lunch 12.30pm - 1.30pm In the Bushido Lounge
Following lunch, sponsored by Mr Khan of Mr Khan’s, botulism free burgers, the conference will veer courageously into developing practical skills. The following inventory will be scrupulously followed:
Programme
Day 1.
1.30pm – 2.30pm  The correct technique for be-heading captured Allied soldiers
3.30pm – 4.00pm  Why were Japanese tanks totally shite?
4.00pm – 4.30pm  Tea break Sticky pastries and assorted lard fancies supplied by Tipton’s premier lard rendering and glue factory
4.30pm – 5.00pm  How to overcome extreme myopia in the Japanese sniper
5.00pm – 5.30pm  How to hone your bayoneting skills prior to bayoneting Chinese babies.


Day 2.
Workshop
9.00am – 12.00pm
Sgt First Class Udon Noodle and Lt Shinto Karate will perform a practical demonstration of the sniper’s art from the rooftop of the Tipton Convention Centre. The populous of Tipton will be the lucky recipients for the sniper’s ministrations. Casualties are expected to be light due to extremely poor marksmanship/eyesight. The newly formed, ‘Kamikaze Japanese Suicide Squad’ will then perform a demonstration of their skills by leaping off the 12-story building.


Lunch 12.00pm – 1.00pm In the Katana Lounge
Delegates will partake in the local delicacy, ‘Faggots and Peas’. The faggots will be provided courtesy of Mr Khan’s rat rescue and resort for Tipton’s large displaced rodent community.
1.00pm – 2.00pm ‘Beheading Extravaganza’  Continuing with the practical demonstration theme, two Japanese officers, Toshiaki Mukai and Tsuyoshi Noda will compete to see who can kill (with a sword) one hundred people first.


Conference Dinner 7.00pm  To be held in the Shogun Suite
Entertainment provided by the ‘Rhotacism Dancers’. They perform the ever popular: We velly velly solly fol wal climes- not lealy.
Fugi fish to be supplied by Mr Khan’s ‘fish el a canal’ suppository range. Subsequent survivors will be treated to a low yield nuclear device el a Nagasaki. Nuff said.