"Speak unto the, children of Israel that they bring thee a red heifer without spot, wherein is no blemish, and upon which never came yoke". (Numbers 19:2)


Apparently, a Jewish sect has been awaiting the birth of a ritually pure ‘Red Heifer’. The appearance of said heifer heralds the reinstating of Biblical purity to the world (no shit). If that wasn’t enough, the event will initiate the building of the Third Temple inaugurating the end of the world (bugger, I’ve just retired!). The Messiah will also turn up and unrepentant sinners will be judged. Now some may say that the Messiah turned up some 2,000 years ago, but the Jews have never recognised Jesus Christ as such. Regardless, if the prophesy holds truth then the likes of me and ilk are in for a bad time. Now I’m not saying I’m unredeemable, it is just that I’ve never lived an exemplary existence and on occasion have been a bit naughty. Hopefully, this ‘Red Heifer’ will turn into a ‘Red Herring’ and not live up to the rigid criteria demanded. Previous candidates have not fulfilled their initial promise as the presence of only two black hairs results in disqualification. Only after a stringent physical examination will the pronouncement be announced on the current heifer. I’m holding my breath that the ‘miraculous beast’ will have too many of the non-red variety of hairs.


Now here is the rub. It seems as if the Jewish brethren have been giving nature and prophecy
a bit of a nudge. For several years past the sect have utilised embryos transferred from Red Angus cattle into the native Israeli cattle. What can I say? Orthodox religious Jews embracing science to force a doomsday prophecy- O, the irony! 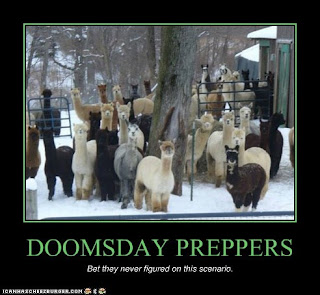