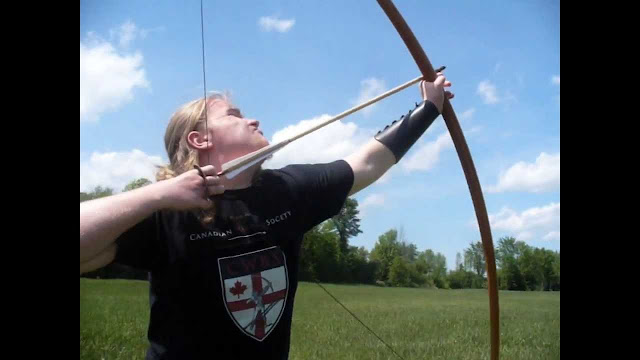 Is there anything more iconic than the English longbow? A weapon responsible for sending more Johnny Frenchmen off to an early grave until the Germans came along with the machine gun in 1914. The origin of the longbow is lost in the annals of time. However, representations of the weapon have been dated at 50,000 years.

The famous English longbow was assimilated from the Welsh during King Edward's  campaign in Wales in the late 13th century. The Welsh used witch elm; a wonderfully twisted and knotty wood. The English war bow favoured the use of yew, but not English yew. During the late middle-ages, most of the yew used for English war bows was imported from Alpine districts in Spain and Italy.

The English longbow is a deceptively simple weapon. The bow is made from a single piece of yew. The log is cut in a certain way so that it contains both the newer, springy, sapwood and the older and dense heartwood. Both these woods are incorporated in the resultant bow stave. When shaped to form the classic 'D' shaped bow, the sapwood is present on the outside (confusingly called, back of the bow) and the heartwood is on the inside (belly). Thus the elastic sapwood bends easily and snaps back when the bowstring is loosed. The heartwood resists compression and enhances the speed and power of the bow. The English war bow represents a natural composite and therefore obtains the best that is possible from a single stave of yew.

It is to be noted that I'll use the term, English longbow interchangeably with war bow. Strictly speaking, a war bow is a bow with a draw weight of at least 80 lbs. That is the weight required to draw the bowstring to its maximum length, usually between 28 to 32 inches.

The English war bow found fame during the hundred years war between the English and French (1337 - 1453). The worth of the English war bow is written in history and the battles of Crecy, Poitiers, and Agincourt resonate down the ages. Indeed, the introduction of the English longbow was the driving force in the development of more effective armour. A bow of draw weight of 80lbs may have been effective against French mail and plate armour in 1337, but as armour technology advanced, the draw weight of the bow increased accordingly. By the end of the hundred years war, the draw weight of the English war bow was in the realm of 180 lbs. The French in response developed ballistic shaped armour and the best quality face hardened steel. The armour of the mid 15th century was a miracle in engineering and very resistive to penetrating projectiles.

There is much debate about whether the war bow and armour piercing arrow of the late middle ages were effective against sophisticated plate armour. This is not a simple question and I don't have space here to put forth the elements of the debate. I have added a link to a video, by Matt Easton, at the end of this article which deals with this most vexed of problems. Matt makes some interesting observations and deductions based on available evidence. As Matt eloquently illustrates, the question generates a lot of passion. In the one camp, there are English archery enthusiasts who are keen to exalt the longbow as the ultimate knight killing machine. On the other hand, there are those who are beguiled by medieval armour and perhaps romantic chivalry who consider, late armour at least, invulnerable against the heavy war bow. Each side will cite evidence in favour of their biased point of view. There are YouTube videos showing arrows slicing through plate armour and there are those showing arrows bouncing off breastplates at almost point blank range. Anyway, watch Matt's video to obtain a balanced view of the debate.

It needs to be borne in mind that well-armoured knights were only a small portion of a medieval army. Most of the retinue, although encased in some form of armour, would have been a lot less protected than knights. A suit of well-made tailored armour was extremely expensive and only the very wealthy minority could afford top quality armour. A fine panoply would be in the region of paying for a top of the line Lamborghini sports car in today's money. Care should be noted: it is often very difficult to make direct economic comparisons between a medieval and a modern economy. Needless to say, good late medieval armour would have been very expensive. The common soldiery would have had some protection. Generally, at least, they would have worn a gambeson, a thick jacket fashioned from layers of linen and or wool. Many would have worn plate armour of some form, often of poor quality. But the plate would have only protected the torso leaving arms and legs highly vulnerable to arrow storms. Nearly all soldiers would have worn a metal helmet. However, in contrast to their chivalrous knightly cousins, the helmets would have been open affording little or no protection to the face and neck. Horses would have been exquisitely vulnerable. A large and mostly unarmoured target would have been an easy mark for men trained to hit a man sized target at a hundred paces. Some nobility may have utilised some form of horse armour, although, by necessity, coverage would be nowhere near complete. Once unhorsed a knight would likely be dazed by the fall from full gallop and thus easily dispatched by bowmen breaking ranks and dispatching the nobility with a heavy mattock to the helmet or a stab with a fine pointed blade to gaps in the plate or the vulnerable groin and armpit. It is to be remembered, an arrow didn't have to kill a man to render him 'hors de combat'. Any arrow wound would effectively remove the soldier from the combat.

The English longbow has attracted more than its fair share of mystique and folklore, especially in English speaking countries. Regardless of point of view, there is little doubt that the English war bow had a powerful influence over medieval warfare and the French, in particular, had great cause to fear this weapon over any other.

As an aside, I have just purchased an English longbow and a primitive flat bow from a company called 'Flagella Dei'. Both bows are made from a single stave of osage orange and pull 60lbs at 29 inches. It would have been preferable if I'd purchased a bow made from yew, but good quality yew staves are extremely expensive. Anyway, once the bows arrive I'll keep my spellbound reader updated as to my experience and handling of these beautiful bows.