This week marks the 100th anniversary of the end of the battle of Passchendaele (3rd Ypres). Ostensibly, the objective of the battle was to reach the Belgium coast. But it soon became apparent to  British generals that this objective was beyond reach. From then on the battle would become one of attrition.

For the British: A terrible and largely pointless battle that achieved little, apart from killing Germans. A relentlessly grim conflict that defines the concept of attrition; fighting for the sole purpose of killing enemy soldiers and hoping that your losses do not outstrip theirs. Is there anything more terrible than the doctrine of attrition? Seeing men as mere counters to be erased from the board. Predictably, the generals who devised such a strategy were divorced from the terrors and tragedy of battle.

To mark this anniversary I’ve decided to rehash an old post. 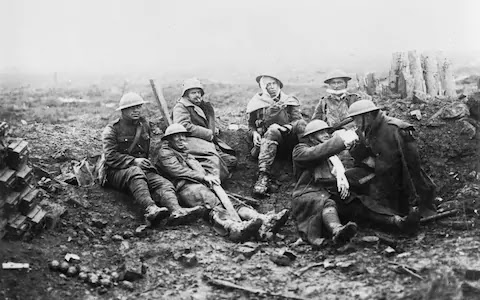 
The Third Battle of Ypres in the summer of 1917 (Passchendaele), together with the battle of the Somme is synonymous, at least in British eyes, with the futility and mass slaughter of the First World War, and in my opinion, rightly so.


General Haig, the commander of the British forces had formed a picture in his mind. He envisioned a German army close to defeat, battered by the  offensive of the preceding summer. One last push to the  coast and the German army would be rolled up from the north. To achieve this end he planned a grand summer offensive in 1917 and chose  as the field of operation. On the map  seemed the ideal place for a major British offensive. A gain of just 30 miles would take the British to the  ports of  and Zeebrugge. The problem was that his viewpoint was not rooted in military reality. Perhaps it was possible to reach the coast if the German army was no longer a coherent entity. But this was certainly not the case in 1917. Indeed, during the battle the Germans felt confident enough to transfer troops from the front line for operations elsewhere.


Lloyd George, the British Prime Minister, was against the offensive from the first and predicted another 'slaughter fest' without any tangible result. Haig was adamant that  and other channel ports could be reached in the first wave of the offensive. He emphasised the parlous state of a  army in disarray and imminent collapse. When Lloyd George visited the Western Front during the battle, Haig removed all the robust looking Germans from the prisoner of war cages to give the impression that the Germans were drawing on their last reserves of man power. Nothing could be further from the truth.


The French allies did not support an offensive here, nor did any of the other British Generals. As one French General so presciently (not a real word) stated: "You can't fight both Boche and boue" (Germans and mud). In fact it was the French army that was close to collapse. The German attack on  in 1916 and General Nivelle's disastrous offensive in early 1917 had brought the French army to mutiny. The army would hold the line but further offensive action was denied to them. The last thing the French wanted was the British army to be ground down in the same way. It would be better to stand on the defensive in 1917 and await for the Americans and tanks for an offensive in 1918.


As predicted, the battlefield became a morass fuelled by summer and autumn rains. All that was needed was the ever present artillery fire to plough and churn the land into a mud/blood bath. Furthermore, in the north the Belgians had destroyed the dykes thus letting in the sea. On this flank the Germans were secure. They had also built strong defences in depth in front of the British trenches. The high water table in the area ensured that the forth coming battle would turn into a duck-walk rather than Haig's imaginary cake-walk.


The offensive was heralded by the obligatory drum fire of artillery extended over several days. The battle began on the 31st July 1917. By the end of the first day it was clear to the British High Command that the offensive had failed. With advances of no more than half a mile the main German line was nowhere breached. Men, tanks and artillery simply sank and disappeared in the deep cloying mud. With no breakthrough in sight, Haig changed his objectives. No longer would the offensive result in the capture of  and Zeebrugge. Instead the battle would become one of attrition with the only purpose of killing Germans. It should be remembered that the concept of attrition is always a two way process. The battle rumbled on for a further three months before being called off.


And so for the butcher’s bill: British casualties- 300,000; German casualties- 200,000. Haig argued that the Germans had suffered severely and planned a further offensive in the spring of 1918 which would bring the Germans to their knees. Again Haig was wrong. The Germans had more than enough men left to launch their own formidable spring offensive of 1918.


The effect on the British army was more subtle. As one British army Sergeant sensibly put it: “We will beat them but not before they break our hearts”. If innocence had been lost on the , so enthusiasm had been lost at Passchendaele. It was replaced by grim determination and a stark professionalism to get the job done, but at what cost?

There is nothing glorious about war except the men in it