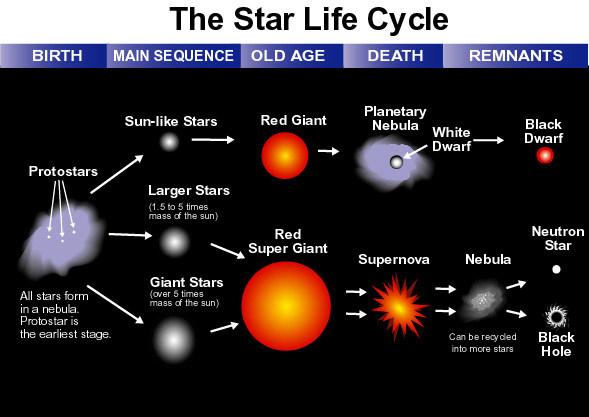 Regular readers of this blog will be aware of my interest in the strange and bizarre and this explains why I'm interested in cosmology and quantum physics. At the opposite end of the scale, of the very small and very large, strange things begin to happen. Physical laws and determinism seem to break down and we leave the realm of science and enter the world of the surreal. It seems ultimately the universe is a very strange place indeed. Perhaps the universe is comprehensible, but not by us. Our intellects might not be up to the task and we will forever flounder in intellectual limbo (stop waxing lyrical Flaxen and start taking the blue pill).


Black holes are just weird. They come into existence when a massive star dies. Once a star has utilised all of its hydrogen the nuclear fusion process will start on the helium. For our sun this will occur in about 5 billion years time. At this stage of its life cycle the sun will transform into a ‘Red Giant’ and expand and swallow the earth. After a further 3 billion years all the helium will have been fused to carbon and the sun will collapse into a star called a 'White Dwarf '. As our sun contracts a great deal of material will be lost in the form of gaseous clouds, called nebulae. The fusion process produces vast amounts of energy which resists the pull of gravity. It is the balance between the energy released by nuclear forces and the contractive pull of gravity which maintains a star's integrity and volume. Once the energetic nuclear fusion process ceases, gravitation takes control and our sun will contract to about the size of the earth. For a relatively mediocre sized star, like the sun, the matter will eventually coalesce and cool forming a dead hunk of matter, mostly composed of carbon.


But what happens if the dying star is 20 times the mass of our sun- now this is where it starts to get interesting. When a very large star exhausts its nuclear fuel it explodes catastrophically (supernova) and the remaining core collapses under the force of gravity. If the remaining material is greater than 2.5 times the mass of the sun, the core will continue to collapse into a black hole.


The contraction continues until a singularity is formed- a single point containing all the residual mass of the star. The gravitational field, close to the black hole, is so strong that not even light can escape. Photons, the quantum packages which comprise light energy are without mass, so how can gravity have any affect on them? I’m not even going to consider the fact that light can act as a wave- that’s another story. According to Newtonian mechanics, gravity is a property of mass and gravity is an attractive force acting between individual blocks of mass. To understand this conundrum we have to enter the rarefied and esoteric world of General Relativity.


According to General Relativity, gravity is not so much a force but the result of mass and energy altering the fabric of space-time. Thus the greater the mass the more space-time is altered or warped. As a photon passes a large mass it will change course due to the altered nature of space- time within the vicinity of the mass. Space time becomes curved and the photon instead of travelling in a straight line, as previously, deviates to follow the curvature of space caused by the mass. The greater the mass, the greater the effect. There comes a point where the space-time distortion is so great that light can no longer escape its grasp. Any matter coming under the influence of the black hole’s huge gravitation 'field' will also be dragged into the abyss to become one with the mysterious singularity. In this way, other planetary bodies can conceivably be engulfed adding to the mass and gravitational 'field' of the dark one.


For quite a long time black holes were a theoretical concept only. In fact because of their very nature you would think they would be impossible to detect. If no light can leave you are not going to see them with a conventional telescope. However, it should be possible to infer their existence indirectly due to the gravitational force on neighbouring objects and photons. One way to detect a black hole is by the phenomenon of gravitational lensing. Light coming from a distant object passing by a black hole will be bent and this apparent movement can be observed by telescopes on earth.


A black hole has a boundary, called the event horizon. This layer represents the boundary between where light can escape and where it cannot. Once a photon passes this demarcation zone it is forever lost to the abyss.


A number of black holes have now been discovered, some within our galaxy and others, far, far away...... Indeed, the centre of our galaxy is thought to contain a very large black hole. It sits in the middle like a greedy ogre, consuming all that comes within range of its irresistible, fetid maw (you didn't take the blue pill, did you Flaxen?).


This short article barely skims this fascinating topic and merely hints at the strangeness of black holes. The more you delve into the topic the more you realise what bizarre cosmic beasts black holes actually are. There are those (even some physicists) who believe that they can act as portals into new universes and may even provide a means for time travel- if only we could survive the journey.
Managed to finish the article without mentioning the word, ARSE. 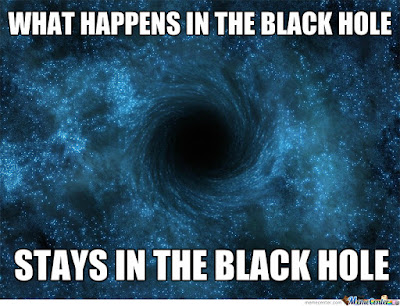