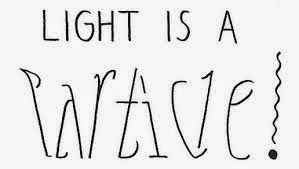 If quantum theory doesn't bedazzle your intellect and have you scratching your bonce in frank bewilderment then you have failed to understand its fundamental tenets. But therein lies the problem. Reality at the quantum level is so bizarre and fantastically weird that it defies coherent contemplation. Very smart physicists gape in wonder at their experimental results. It is as if the human brain is not wired to fully appreciate the workings of nature at the infinitesimal level. The world of the subatomic eludes logical appreciation and appears forever counter to our model of reality. This may explain why sub-atomic particle physicists, more than any other group of scientists, are prone to mysticism.

Take light for example. Light is the visible form of electromagnetic radiation. Up until the turn of the last century, light seemed well behaved and could be described as a wave. However, disturbing experiments began to suggest that light under certain circumstances behaved as a 'quanta package', a particle called a photon. But how can this be? Light is either a particle or a wave, how can it be both? In fact it seems that all sub-atomic particles can be described this way. Depending on how the experiment is designed light can be observed as a wave or a particle. But even more strange, it appears that light behaves as a particle or a wave depending on whether it is being 'observed' or not. It is as if the particle/wave knows it is being watched. For those who would like to know more about nature's absurdity I've embedded a short video which explains this phenomenon simply and elegantly.

Life at the macroscopic level is never so strange, or is it? After all we are composed of a near infinite number of particles which if they prefer, transform to waves. How does all this impact on the real macro world we inhabit? This happens to be a highly controversial subject, and not just confined to the world of science. The implications of quantum physics delves deep into our core reality. Counterintuitive it may be, but the quantum world can be readily demonstrated and underpins all existence. The philosophical implications are profound and even impinge on ancient philosophical conundrums traditionally relegated to the realm of pure speculative thought. Thus, the notion of whether we are able to exercise 'free will' or whether we are deterministic automata has engaged minds for over two millennia. If anything quantum physics has added an extra layer of complexity to an already intellectually dense and troubling debate. It seem that quantum theory can be used to support either standpoint and every subtlety in between. It would be interesting to return to this fascinating topic at a later juncture. I feel a series coming on.........

Big Albert gets the last word:

"It seems as though we must use sometimes the one theory and sometimes the other, while at times we may use either. We are faced with a new kind of difficulty. We have two contradictory pictures of reality; separately neither of them fully explains the phenomena of light, but together they do."