War Horse- In the Beginning 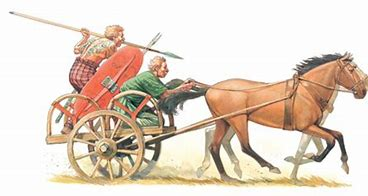 British  Warriors Prior To Annihilation

Tis time to consider a post with a military flavour. Don't be angry, be amazed!

There can be no doubt that the horse has played a significant role, in war, since the 2nd millennium BC up until the Great War. Modern artillery, the bolt action rifle, the machine gun, and wretched flesh-ripping barbwire doomed the horse to the glue factory, circa 1914-1916. Sadly, for combatants of the First Great War, sentiment at the beginning of the conflict overcame reality. Thus is the raw emotional attachment of man and horse. A combination able to transcend reality until reality forced acquiescence on reluctant men- the horse had no say in the matter. Is there no more pitiful sight of seeing broken, once noble beasts (of both species)  littering the desecrated, shattered land of the post-apocalyptic battlefield?

When man first contemplated the horse, about 5,000 years ago there was no thought of using the beast to pull a cart (what's a cart?) or support the weight of a man. The horse of the time was a poor specimen without anatomical merit. The folk of prehistory were at the stage where domestication of tractable stock was becoming a reality. The stout oxen replaced the stout farmer at the plough. However, the ovine character and physiognomy prevented this beast of burden to progress as a useful creature for war, except in the field of logistics.

Back to the primitive horse. Consider the modern variety. In our fields, we see the stout, round-bellied pony. In the right hands, this beautiful creature is happy to accept the weight of its beloved owner. Also, contemplate the thoroughbred. A pampered and expensive equine of intense beauty and restrained strength. A horse for Kings and Sheiks. A horse with a lineage to rival the descendants of King David and demanding a King's ransom. But it wasn't always so.

The horse that was to make such an impact on warfare went through a long process before it became the formidable warhorse that bestrode battlefields, unchallenged, throughout millennia. The horse available to folk of prehistory was unsuitable for use as a beast of burden and became another provider of protein. The ancestor of the modern horse was hunted unto oblivion by the Amerindians that crossed into the Americas at the end of the last ice age. The horse species available to stone-age man was much shorter than modern breeds and lacked the strength/stamina to bear a man's weight. By selective breeding, humans of prehistory used sound empirical observation and native intelligence to improve and modify suitable stock: first to enable domestication and secondly, to unlock desirable physical characteristics. Thus, it seems that primitive man was an evolutionary geneticist, thousands of years before Darwin put the fundamental principles on a sound theoretical footing. Not all species exhibit the necessary genetic plasticity. For instance, the humble onager and donkey have resisted all attempts to breed a strong-shouldered animal capable of bearing the burden of a man. Of course, the animal can be ridden upon the stout hind haunches but this mode of riding does not allow for fine control of the beast. Furthermore, these animals are notoriously stubborn and intractable to command if they so desire. No amount of breeding will produce an animal with a consistent and compliant/pliant disposition in these obdurate creatures.

On the route to true cavalry, there was a necessary interlude. As the selective process was ongoing in the third millennium, and before the horse became robust enough to carry a rider in the forward 'control', position, the horse became harnessed for war, by being harnessed to the war chariot. The two-wheeled chariot, no more than 75lbs, was married to two horses. This was the first true 'vehicle' for war. The stamina and speed of the horse gave man a new advantage in the game of war. This union enabled the skilled charioteer, given suitable terrain, to speed across the land at an unprecedented  20 mph.

The appearance of this new weapon on the primitive battlefield not only conveyed an immense tactical edge but also gave forth a terrifying psychological advantage akin to the German reaction when confronted by the British tank on the Somme in September 1916. It also resulted in the creation of a unique societal warrior elite, a trend that continued unhindered with the development of calvary proper.

By 1700 BC the perfection of the light chariot wedded to the short but powerful composite bow, produced a union in heaven or hell, depending on whether you were the protagonist or recipient. Once the horse became strong enough in the shoulder to carry a man, the chariot-borne warrior became obsolete except for isolated barbarian folk. The fierce, woad bestrewn, often naked warriors of Britain, were too primitive to have realised that the chariot warfare they practised was considered antiquated by their more civilised continental neighbours-  certainly, the Romans were mightily unimpressed.

By the middle of the second millennium BC, chariot folk, descended unto the rich civilised lands of Mesopotamia and wreaked havoc amongst their more refined neighbours. Foot soldiers of the time, could not counter the combination of fleet chariots and the awesome majesty of the composite bow. Woe to the static warrior!

The dominance of chariot warfare was everywhere short-lived.  Once the horse had become selected to bear a man's weight upon its withers, the manoeuvrability afforded by this critical development doomed the chariot to be but a footnote in the history of war. The impact of the horsed warrior, in all its manifest guises, upon the battlefield, and by extension history, will become the focus of my next post...... Do not despair gentle reader! I have already embarked upon this critical composition that will grace this esteemed blog with timely abandon. Arse.