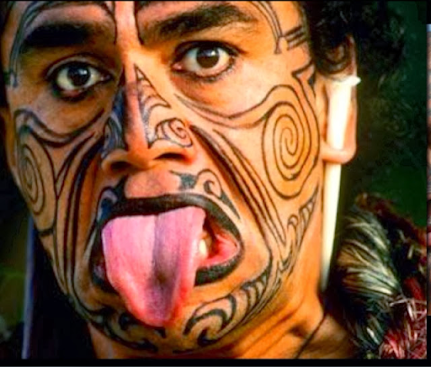 It has not been well publicised but today is officially recognised as: 'Anglicise New Zealand Day'. This day was initiated on the 20th of May 1832. It was inaugurated, by the then Governor of New Zealand, Sir Wolfram Vanderpump (Earl of Tipton). The proceedings were held outside the Guildhall, Russell, at Noon. Apparently, it transpired that the day was unseasonably warm and the apparel reflected the rather moist conditions. Local dignitaries were present, including the then-incumbent mayor of the capital city of Russell. Twas none other than the Right Worshipful, Enoch Dimmoch-Saxmundham (b1784 - d 1856). Apparently, the ceremony ran smoothly, until the local Maori Chieftain, and his companions decided to intervene and make their presence known. An impromptu Haka transpired and the intimidated local folk complained and thus the honour guard present was ordered to present arms and give a volley of their Brown Bess muskets. According to standard military protocol, of the day, survivors of the tirade were dispatched with the bayonet. Luckily the unsavoury event propagated by the duskies did not ruin the proceedings and the event continued unabated.

Later that day, after sundry announcements, the event concluded with a cream tea and savoury dainties; cucumber sandwiches were not included. Finality was provided by the Lady Mayoress with a spirited solo rendition of the 'Maid of Verona' in E Sharp Major, with a minimum of vibrato.

Tis my express wish to keep these quaint ceremonies current and up to date and consequently, have written to the current Mayor of Nelson and surrounding environs, Mr Ngu Nagawatu-Mugumbo, if it would be permissible, and in keeping with this auspicious historical day, to change the local township, Kakipoopoo, to Flaxen Town. I am expecting a favourable response. Arse bucket, akimbo.