Bloody Photons and the Passage of Time 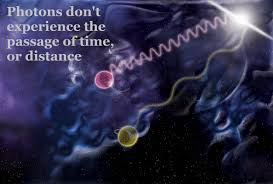 Photons don't experience the passage of time or distance: discuss
Occasionally, I will introduce a topic or piece of random knowledge to this blog that requires a modicum of deep thought and contemplation. Mayhap a profound contradiction will be discussed or a puzzling aspect of our existence, put forth. These are the sort of problems I wrestle with long into the night. They keep me awake and lead me to ponder this world with excruciating pangs of wonder. The ticking of the beside clock insinuates and reminds, that, for my existence, time, if it exists, is very much a finite quality/quantity. This is one of those occasions.

Since Einstein we have come to appreciate that time and space are irrevocably intertwined and relative to the observer. The full ramifications of the theories of special and general relativity can be difficult for us to assimilate. Luckily, for the most part, the effects of time dilation and the warping of space is negligible for the majority of our earthly activities and can be explained very well using simple Newtonian mechanics. A good example of when the effects of time dilation are important concerns the movement of satellites. Even at their modest orbiting speed of 14,000 kilometres per hour, GPS satellites experience time dilation relative to our pedestrian earthly stance. These effects have to be considered and allowed for otherwise instead of driving to 12 Acacia Avenue, you would, no doubt, end up at 14 Acacia Avenue.

When we observe a photon travelling the cosmos we perceive that photon to be travelling at 186,000 miles per second over well defined points in space. This is our viewpoint of how light travels. We should note that the speed of light remains constant no matter the frame of reference. But how do mass less photons experience their plight/flight? According to Einstein's postulate, photons travelling at the speed of light are not constrained by space or time. Einstein’s equations predict that photons transcend reality. Photons don’t travel and their clock ticketh not at all. From their conception to destination arrival is instant. This is why I don’t sleep too well. If the universe is infinite the ramifications boggle our feeble minds. Is space and time just a beautiful illusion? I will admit that my conception of the universe at the very large, very small, and the very fast is beyond my feeble comprehension. I’m lost in a sea of contradictions. I know that I will go to my grave as ignorant as a new born babe.