Is God a Democrat? 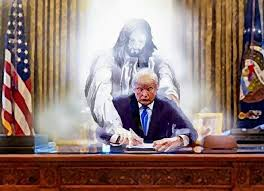 As reported in this blog a little while ago, it appears that God had taken a special interest in the recent American elections. Indeed, it also appears that God is a conservative (but read on) with profound partisan views and declared his stalwart support for Donald Trump. Not only has God endorsed the incumbent but has predicted that Trump would be re-elected for a second wondrous term.  How do we know all this? Although god, on occasion, works in mysterious ways, in this instance he put forth his views via a series of human conduits. Interestingly, in these modern technological times, God eschewed the modalities of Twatter and Arsebook (arse). How quaint.

In some instances, God related his preference, directly, while to others he utilised intermediary Angels. To complicate matters, there have been messages from Jesus himself. As I understand my Nicene Creed, Jesus is but one manifestation of the Godhead, the other being the Holy Ghost. All this can be rather confusing for a simple Tipton lad. I understand the need for delegation, running the entire universe can be no easy matter, and this would explain the need for Angel intercession.  What I find confusing is that Jesus and god, although one, seem to be content to manifest as separate entities- tis enough to make your head spin. Furthermore, Trump emphatically lost. How can God be wrong? What happened to this omniscient thingy? In some testimonies, it seemed apparent that god was influencing the vote in Trump’s favour. This would be a prime example of ‘Divine Intervention’. How could this be achieved? There are two schools of thought: a host of Angels, suitably attired in mortal raiment, could present themselves at the polling stations and make their mark to benefit the Trumpster. Hopefully, their various visages would not be too radiant as to scare away the non-divine populace. I suspect the wings would have to be discretely folded and tucked away, otherwise folks will conclude that they were being mobbed by a host of hunchbacks- most off-putting. Mayhap god decided to wave a ‘magic wand’ to miraculously influence the election. This would be easy for a deity capable of parting the Dead sea, turning women into salty towering bints, and setting the occasional bush on fire while on high.

Inexplicably, it did not come to pass and Trump lost. How could the will of God be thwarted? Had the Angels been sleeping on the job? Could he have changed his mind at the last minute and hankered for moribund Joe Biden?

Of course, there is another more mundane possibility- the pundits, various, are madder than a bucket of frogs in vinegar- I think we should be told.

In support of my thesis watch the following and weep.