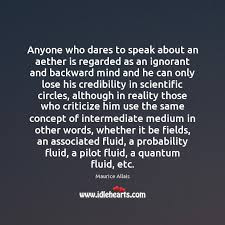 Aether, the intractable and intangible aether: the substance that never was, perhaps. The concept of 'The Aether’ has a long and delectable history. Aristotle in the 4th century BC theorised that the aether was the 5th element and together with the four terrestrial elements, earth, air, fire, and water were essential components comprising the divine universe. However, the aether was altogether superior to its four lesser earthly elements as Aristotle considered the heavenly bodies solely formed from this mysterious substance. As the West began its ascent from the intellectual miasma and stagnation of the ‘Dark Ages’, sometime in the 13th century, the concept of ‘aether’ transmogrified into the quintessential element of alchemy.

Like the ancients, medieval scholars considered the aether divine but it was not confined/consigned exclusively to the heavens. It was envisaged that all things on earth, even humble rocks, partook of the divine nature. The aether was bound and invisible and could only be perceived and let loose by God. The great polymath of the 17th century, Sir Isaac Newton, was a firm adherent of the aether. For Newton, the aether was an elastic medium permeating all space and its presence was essential for the propagation of vibrations. Most folk, if they consider him at all, think of Newton as a hard thinking rationalistic scientist, and there is some truth in this. However, Newton had a dark irrational side and was a fervent follower and practitioner of the pseudoscientific activity of alchemy. After Newton’s death, his ‘work’ in this area was actively suppressed by a scientific community fearing ridicule.

The Dutch scientist, Christian Huygens (d 1695) considered the presence of the aether essential for the propagation of light waves. By this time Newton’s conceptualisation of light as consisting of particles (corpuscles) had fallen into disfavour due to lights demonstratable wave-like characteristics. Of course, Newton’s corpuscular theory would reemerge when it was discovered that light could behave, depending on circumstances, as a particle or a wave (wave/particle duality).

By the 19th century, the aether was becoming rather troublesome. For here was a substance that was supposed to fill all space but it stubbornly remained invisible to scientists and it could not be measured or detected- a most perplexing phenomenon. In 1887, Michelson and Morley designed the ultimate experiment (at least to their mind) to determine once and for all whether the aether was real or whether it was a figment born of a phantasm spawned by a fancy....... Our intrepid scientists reasoned that light should travel at different speeds as it traversed the aether in different directions. As the earth rotated through space/aether, it should generate an ‘aetheric wind’ which would slow down light beams travelling contrary to the earth’s orbit. The experiment was set up in a basement and the apparatus was set upon a large pool of mercury for stability and accuracy. The experiment showed no evidence of ‘light drag’ and thus the concept of the aether was abandoned. Physicists had to face the strange conclusion that light travelled through the vacuum of space without a meddling, mediating, manifold, medium, manifest.

By the 20th century, and after 2,000 years as a cogent theory, ‘The Aether’ seemed well and truly discredited. There was still the problem that all known waves, except light, required a medium through which to travel. How can light waves be propagated in the vast vacuum of space without a propagating substrate? In our modern age, it has become clear, that the empty vacuum of space is not as empty as first thought. Space is imbued with a quantum field: atoms come into existence and disappear spontaneously and the fabric of space is capable of expansion, therefore, resulting in cosmic inflation. It was hoped that Einstein’s theories of relativity would one day provide a grand unifying theory of physics, but this has not been the case. While Einstein’s genius was able to explain the universe of the very large and very fast it has not been so successful at the quantum level. Leading physicists are contemplating the unthinkable: Einstein’s theories are not the answer and another theory awaits to fill the void- an overarching universal paradigm that will unite the quantum and cosmic worlds. It has become apparent that Einstein’s special and general relativity theories are at odds with the newly acquired and elusive concepts of dark energy and dark matter. Although we haven’t been able to observe this exotic non-baryonic matter and energy it is likely to be the driving force in the universe's expansion. Indeed, according to current cosmology, 68% of all energy in the universe is present in this occult (I mean 'occult' in the hidden sense with no reference to the supernatural) form. Mayhap dark energy is the force pervading all space and hence it may not be scientifically impudent to call it the fifth force of the universe or aether. Thus after a hiatus of 100 years, the concept of 'The Aether' is making a come back in serious scientific circles. If it does exist as a real quantum phenomena, then we should be able to detect its presence, eventually. If not, it will have to remain as a powerful, but theoretical concept. From this scientific darkness, we await enlightenment.