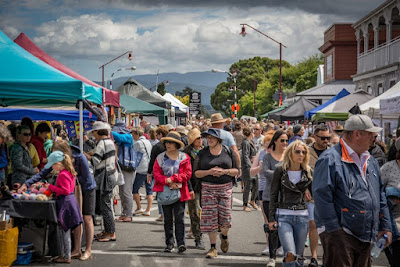 What follows is a frank and truthful account of the day’s proceedings at Martinborough fair: I do solemnly declare.

The plan, on this fateful day, was for an early rise in order to reach Martinborough town before 7am. But the best-laid plans..... Anyway, all involved developed an unusual affinity with their beds that early morn and therefore we awoke from our slumber way past the time originally planned. Luckily we had prepared and stocked our transport the night before and we were soon on our way to sunny Martinborough, hurray!

We managed to arrive in the centre of town at about 7.45am. Already the environs were a seething mass of humanity and it occurred to us that we might struggle to find our way through the writhing crowd. Luckily, our pitch was situated in a car park and therefore we were able to traverse the area without too much trouble. By this time the other stall holders were in position and hawking their wares with gay abandon. Within 20 minutes we had managed to raise the awning, position the trestle tables and place our bows, arrows, assorted arm guards and slingshots for critical inspection. Our knife selection was carefully arrayed in the perspex box allotted for their confinement: Health and Safety is always our main concern, except when it isn’t.

Within a minute of arranging our goods we were approached by two young men of the parish: stout burghers, tall as trees and strong as oak. They expressed an interest in our knife selection and promptly purchased two of our finest ‘bush knives’. More knife orders were to follow and a distinct pattern of purchase was soon to emerge: the knives and slingshots were hot sellers and were whisked from the stall as if caught in a maelstrom of doom. The bows on display elicited much interest and my son and I grew increasingly hoarse as the day progressed as groups coalesced on our stall frontage demanding to hear of tales of daring-do of a time long past....... My ancestors in serried/arrayed ranks swam before my beautiful blue eyes. Stalwart yeomen bedecked in gambeson and kettle hat marched past clutching poles of mighty yew. Strained sinews send forth feathered shafts of ash, finally to rest and lay low the finest chivalry of the French nation..... Tears did upwell and roll like a babbling brook down my fair cheeks. I blame the French onion vendor in the adjacent stall. Damn syn-propanethial-S-oxide! I considered charging my son with the task of dispatching the Gallic offender responsible for assaulting my lachrymose faculties, with a yard shaft, but on second thoughts I considered the action ill-advised. I’ve digressed.

As the day progressed our supply of quality knives and slingshots became exhausted. Although many expressed an interest in our bows it became clear that none were prepared to put forth the significant outlay to purchase a quality bow and associated accessories. This was as predicted so we were not overly discouraged. The plan was to promote our brand to as many folks as possible and the large Martinborough venue amply provided for this. In the end, we made a shade under 500 dollars. A reasonable return for a day’s toil. The only glitch: some light-fingered nerk managed to steal a single arrow. Not a catastrophic loss but underscores the need for eternal vigilance.

After a long day of hawking our wares and explaining the arcane mysteries of the archer’s craft, we finally packed up and placed our goods on my son in law’s pick up truck. To end our arduous day of toiling under the hot New Zealand sun, we stopped off at the local hostelry to imbibe a couple of fine ales.

The whole procedure will be repeated on the 7th March and we have made plans to replenish our stock. Hopefully, the weather will be glorious and the day will unwind as before. We may try to promote one of cheaper entry-level bows. Although relatively cheap, the bow is a sturdy and consistent ‘shooter’ and a great introduction to the sport. Anyway, I will pen a progress report of the coming day unless I become terminally bored with the whole thing or am distracted by the latest shiny thing. Arse.