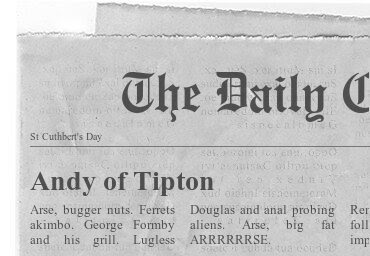 Randy Andy
Shock breaking news from the sleepy kingdom of Tipton. For today it can be revealed, by this esteemed chronicle: ‘The Daily Chain Mail’ that Prinze Andy Pandy has been implicated associating with young maidens, not yet nubile, for rumpy-pumpy.

Nonce
A vivid sketch (in delicate pastel shades) has come to light showing the Prince in congress with maidens, multiple. Furthermore, the exalted Prince has been shown to be an intimate associate of Jeffried Epstein-Barr Virus, a notorious procurer of wenches below the age of consent. Numerous sources attest that the unsullied Prince spent much time with Jeffried on his expansive/expensive longboat. Rumours, of known provenance, suggest much feasting and carousing with the whole proceedings adorned with serving bints, unknown to man (allegedly).

Out of Touch
Queen Dotage and her consort, Fillip, The Philanderer, have issued a parchment, stating thusly: ‘My husband and I can categorically state that Andy Dandy has never set foot on Jeffried’s longboat or has ever been in the vicinity of Jeffried and his assorted under age concubines. The Prince is appalled, agape and nonplussed that he has been found out'. (surely some mistake??).

Shot Unto Death
Sadly, it can also be revealed that Epstein-Barr virus was slain during a hunt, yesterday. Unfortunately, Virus did wander into a glade and was immediately riddled with a hundred yard shafts. The palace is treating the incident as a calamitous mishap (mayhap?). As is the case with this sort of thing, more unforeseen accidents are predicted. It is estimated that the resultant accidental death toll will be copious. This is in keeping with a noisome miasma which coats the land, at this time of year, and is well known for laying low the peasantry and thegns but not the nobility who are protected from the fall out from the tangible ordure and fetor. Arse.

Buggering off and Laying Low
In response, the Duke has characteristically decided to decamp to a luxury resort situated in the neighbouring principality of ‘Dudley on Canal’. He is accompanied by his ex-consort, Ferglander, The Useless, Wretched, Money-Sucking Bag of Dog Poo. Andy has eschewed the right to comment on the unfolding proceedings and is likely to hold out in divers strongholds until the wind doth change direction. Double Arse.