The great British philosopher, Bertrand Russell was of the opinion that the German savant, Gottfried Leibnitz was the ‘greatest known intellect to have existed’. This is a bold statement considering Leibnitz was a contemporary of Isaac Newton. And let us not forget that the middle of the 17th century to the beginning of the 18th was a prodigious period for scientific and mathematical invention led by continental and British intellectual giants.


I will not become enmeshed, nay embroiled, in the debate to whom should be ascribed the accolade, ‘greatest genius’. From a purely scientific perspective, Newton appears to have been the more prolific and made great strides in physics and mathematics. Leibnitz was no slouch in the realm of physics/mathematics either and pontificated greatly on philosophy and is famously known for developing his theory of ‘monads’. In contrast, Newton devoted an inordinate amount of his intellect to esoteric and arcane theology. Refer to my post on Newton which delves into Newton’s profound obsession with ‘mystical studies’.


In this post, I would like to touch briefly upon the controversy which erupted between these savants concerning the primacy of developing the mathematics of calculus. Modern calculus is an extremely powerful tool for determining infinitesimals, integrals and rates of change. The application of calculus, over 350 years, has been influential in the development of many scientific discoveries. Unlike many abstract fields of mathematics, calculus has a plethora of practical applications and has insinuated its way into physics, chemistry, biology, and even economics.


The consensus of modern scholarship is that Newton developed a form of calculus in 1665/1666 but was loathe to share his findings by publication. Leibnitz, independently formulated and published his version of calculus in 1675. Once Newton became aware of Leibnitz’s discovery, he let it be known that he had indeed made important strides in the development of infinitesimals a decade earlier. There followed a bitter debate and dispute, mostly between adherents of these famous men as to the primacy of the discovery. Both men are accredited with huge prickly egos that hindered any rational discourse. At the time, probably due to Newton’s almost ‘god-like’ reputation, Leibnitz was not ascribed the credit he was undoubtedly due, at least in the British Isles.


As a digression: Of interest to me, is how great revolutionary ideas can be independently formulated at the same time. A parallel example can be seen with the expression of evolutionary theory in the middle of the 19th century. Both Darwin and Wallace produced evolutionary theories within a short time of each other however, there was no bitter dispute between these measured and modest men. At the time, Wallace was given due credit but subsequent history has been unkind to Wallace’s memory and his contribution has all but been forgotten except by professional biologists. In contrast, although Leibnitz was castigated for plagiarism at the time, modern scholarship has acknowledged his independent contribution. Again, however, this is not a stance well known to the general mug punter. Original ideas are not formulated in an intellectual vacuum. Newton and Leibnitz were basing/basting and extending the work of those who had gone before. The dynamism of this intellectually fecund period cannot be overstated.


I think it wrong to consider either man as having ‘discovered’ calculus as such. Tis better to think that both men made highly significant contributions to the field and developed their analysis from earlier mathematicians. Thus, Archimedes was the first to find the tangent to a curve other than a circle, in a method akin to differential calculus. A gaggle of seventeenth-century mathematicians (see: Rene Descartes, Blaise Pascal, Pierre de Fermat, John Wallis, Cavalieri) made genuine advances in the field and laid the foundations for Newton’s and Leibnitz’s synthesis. And of course, Newton and Leibnitz’s contribution was not the endpoint. Both systems were plagued with problems allowing those who followed to refine/redefine differential and integral calculus to higher levels of sublimity. Importantly, Newton and Leibniz did not formulate the same calculus and came by their insights by different analytical roots/routes. Newton’s concepts were essentially empirical (he liked to draw lines, circles and tangents), while Leibnitz relied heavily on deep analytical contemplation.


Today, the notation we use in modern calculus is derived from Leibnitz. Even though modern calculus has been revised, developed and 'perfected' from its original conception(s) this in no way distracts from the genius and astonishing contribution made by these truly, Great Men. 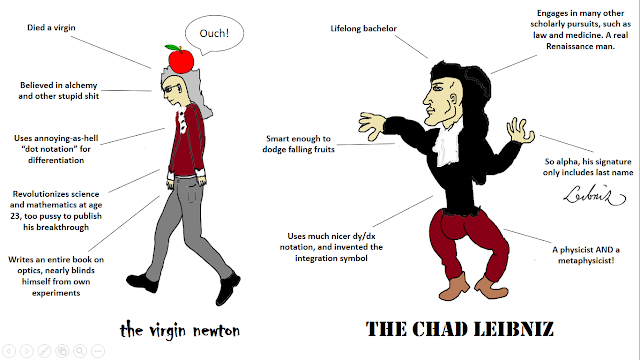