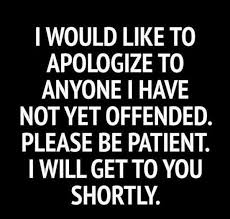 As my friends and family will no doubt readily attest I’m a progressive kind of chappie: kind, generous, accepting and socially encompassing. I would rather burn down an orphanage than see a fellow human go without their Sky tele. I would be the first to allow a passing troupe of gypos to make camp on my estate and take part in my rich bounty. I would be more than happy to converse with this vibrant, culturally endearing and picturesque folk. They would engage me with daring do tales of thievery, illiteracy and casual violence. I, in turn, would remove their rotting mounds of shit and detritus with a song in my heart and refrain from a natural desire to practice my musketry on their unkempt, noisy brats. Some would say (?Mr Mugumbo) I’m the archetypal social justice warrior endowed with liberal, forward-looking views on feminism, multiculturalism, civil rights and gender assignment.  There are those who espouse that the term ‘Social Justice Warrior’ has attracted negative connotations of late. How can the ‘voice of reason and compassion’ ever be associated with error? Let us force our ‘vision’ of the world on the undiscerning and uncomprehending so that they too can wallow in self-righteousness and smug validity. In support of my thesis, I present the following excellent examples from fellow SJWs, gleaned from various sources of social media. No doubt you will be convinced and join the happy ranks of the professional SJW and be imbued with unctuous, strident and self-aggrandising vainglory. 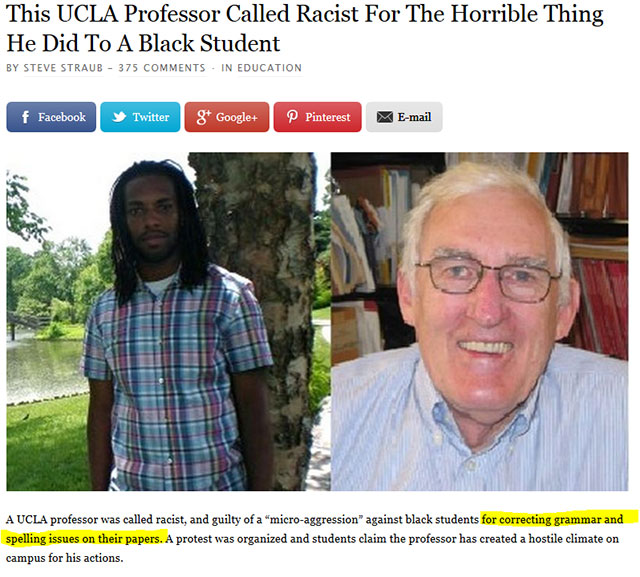 How true. How dare a white professor do his job and correct submitted papers for spelling and grammar from our dusky brethren. If folk are too fucking dumb to use a spell checker (spear chucker) then they demand to be treated by piss poor standards not available to all. I hope the professor is sacked or at the very least undergoes a lengthy period of re-education in order to realise that certain 'groups' have to be treated by less stringent criteria than white people. Makes perfect sense, doesn't it? 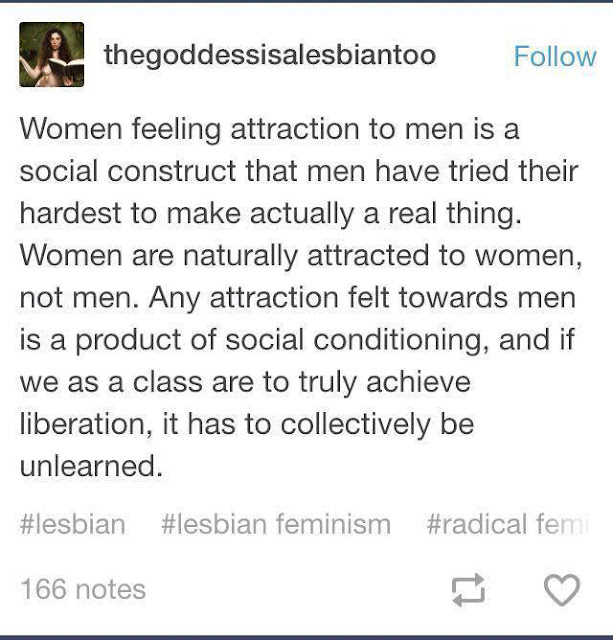 What wise words from the 'goddess'. Aeons of evolution are clearly wrong. Women should eschew sexual relations with men and exclusively indulge in sapphism for the edification of future generations. 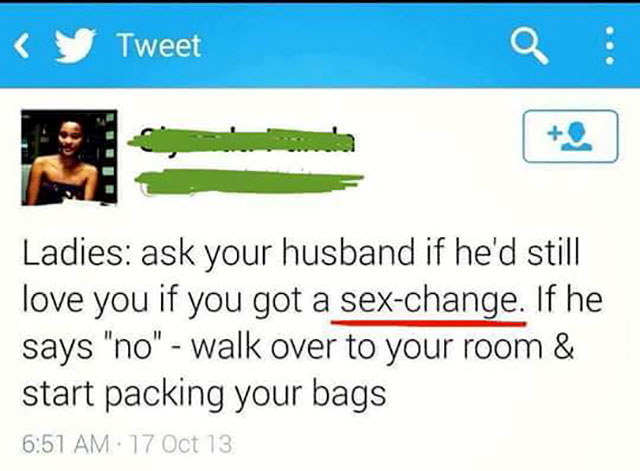 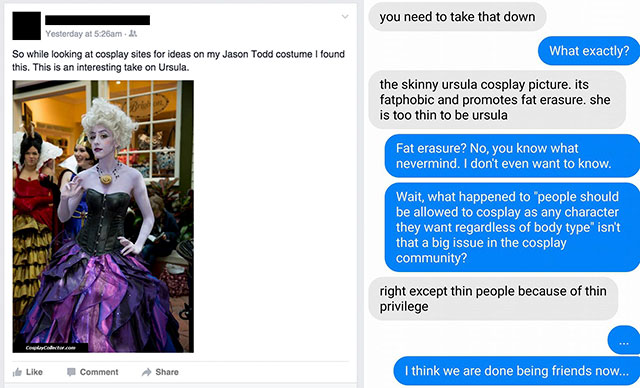 Seems perfectly okay to demand that someone remove a post for the heinous hate crime of fatism or fatphobia. If this 'thinist' women had taken the necessary step of forcing down large numbers of pies she would legitimately be able to wear this costume with aplomb. How utterly selfish of her.
Arse crinkles 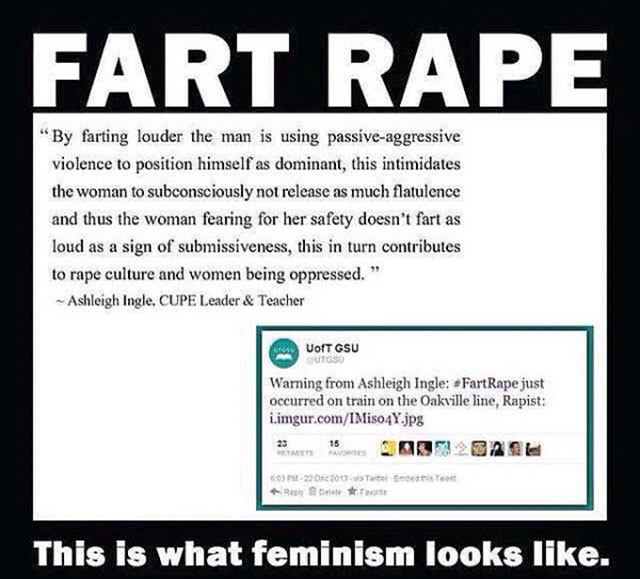 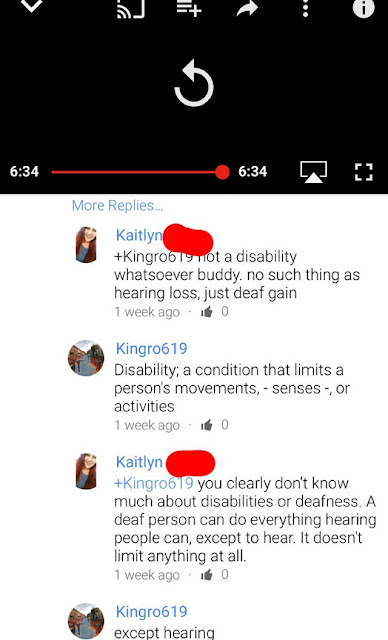 I am genuinely educated by this amazing piece of perspicacity. Clearly, an individual without the requisite number of legs is not ambulatory impaired, but just unable to walk anywhere. There is no limit in movement because mobility is another social construct imposed by an uncaring, insensitive, white masculine gender restrictive paradigm. 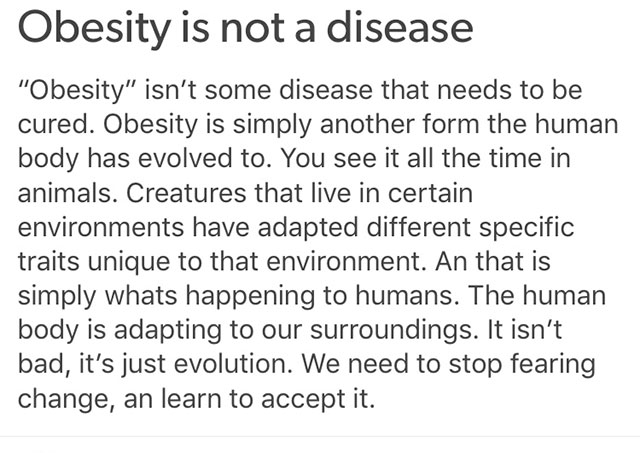 There you have it. Being morbidly obese is not a problem. Tis a fundamental expression of adaptive evolution. Presumably being 'adipose embellished' is an adaptation to a calorifically enhanced environment. Simply remove excess nutrition and the violition to ingest excessively and watch the corrective power of evolution fashion a thin person from a fat person. Evolution acts like that.

After such an extensive education session I'm going to have a lie down in order to fully digest the accumulated sagacity. Afterward, I may endulge in a little light incendary activity as is my wont.