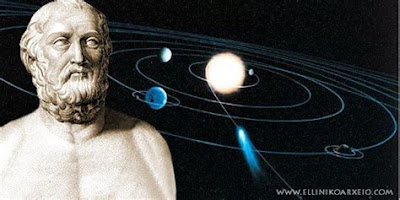 Aristarchus of Samos wallowed in this world circa 310 BC to 230 BC. A philosopher not quite in the mould of classical philosophers. Aristarchus, like Archimedes, embarked on what would be called today: ‘Scientific Endeavour’. He is the first to present the heliocentric model that placed the sun in the centre of the known universe. This was in contradiction to the widely held view, famously put forward by Aristotle, which placed the Earth at the centre of all celestial bodies. The Earth-centric model was further developed and mathematically refined by Ptolemy of Alexandra c150 AD, from which it takes its name (Ptolemaic System). Thus, Aristarchus’ heliocentric model remained an unpopular explanation for the near cosmos until the coming of Copernicus who showed the scientific validity of the heliocentric system (1543) in his book, ‘On the Revolutions of Heavenly Bodies’. Nicolaus Copernicus, to his credit and rightly so, ascribed the origin of the model to Aristarchus. Of course, the works of Copernicus and others heralded the coming of the ‘Scientific Revolution’, a most remarkable and scientifically fecund period in human history- I’ll have more to say about this period in a future post. The evidence for a heliocentric system could have been divined by any genius during the Medieval period had it not been for the Catholic church. The Church effectively stifled contemplation along these lines. Anyone, suggesting a non-Earth ascendant model risked the designation of heretic as it was considered contrary to ‘Holy Scripture’. Copernicus’ model did not immediately receive Papal censure possibly because Copernicus posited the model as a hypothesis and couched his thesis in a way to suggest it was not necessarily true. Also, it was a difficult time for the Church as it was heavily involved and distracted by the 'Council of Trent' (1545-1563). During this period the Church was grappling with the devasting implications of the Protestant Reformation. With time, religious opposition mounted and the book was placed on the list of banned books 73 years after publication.
We have little of Aristarchus' work from his own hand and most of what we know about this presciently modern thinker is derived from the pen of others, especially Archimedes. This is unfortunate as other writers rarely go into detail as to Aristarchus’s deductive thinking. Therefore, it is not known whether Aristarchus arrived at his revolutionary system by intuition or whether he used astronomical observation and mathematical reasoning to thrash out his model. I’m inclined to the latter explanation as it is known that Aristarchus was an accomplished mathematician and astronomical observer.
Sadly, only one of Aristarchus’s works has survived. Here he attempts to calculate the sizes of the sun and moon. He also makes a heroic attempt to calculate the Sun and Moon’s distance from the Earth by observation. From this, he calculated that the distance of the Earth to the Sun was 19 times greater than the distance to the Moon. Although his result was incorrect this was due to the limitation of observation technology of his time. His methodology and deduction were faultless.
And there we have it. Poor Aristarchus has never received the recognition he undoubtedly deserves. In ancient times this was probably due to the unpopularity of his theory as it clashed with the musings of the balefully influential, Aristotle. In  modern times he has gained a mere footnote in the annals of history and most folk today are oblivious to this ‘Great Man's’ achievements.

Sometimes history can seem unfair and capricious for reasons often dimly perceived or perceived not at all. But this is no bother to industrious Aristarchus- his consciousness has long since disappeared and posthumous fame can count for nought with the dead.