Flatness is on the Rise 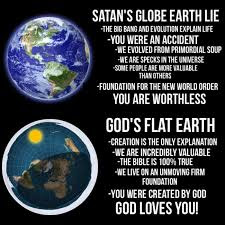 Believe it or not, but there are folk who inhabit this spherical world who earnestly contend that the Earth is flat. Not only that, the trend appears to be gaining in popularity to the extent that ‘Flat Earth’ conventions are being held in the United States on a regular basis. There is an oft cherished and erroneous belief that late Medieval Europeans believed in a flat Earth. This is certainly not the case. In fact, the ancient Greeks had conclusively shown that our world is round by simple trigonometry. Also, the ancient Greeks observed lunar eclipses and correctly deduced that the curved shadow of the Earth falling upon the moon indicated a spherical Earth. There is no doubt that unenlightened folk living in unenlightened times considered the Earth to be flat. This notion would be based on intuition and the flat appearance of the terrain to a naive observer. Furthermore, many religious beliefs, according to their Scriptures, and including Christianity, held the view of a flat Earth, steady and fixed. Even today, folk who should know better, take Scriptures as absolute truth and are loath to consider religious writings in their historical and cultural setting.


The rise of modern science in the West has provided numerous proofs for the spherical Earth. And if you are not convinced by the stunning photos obtained from space then nothing will convince you. The vast majority of mankind appear convinced. I’ll not relate the many arguments supplied by flat Earthers for their propositions and the plethora of counter-refutations. Given the overwhelming evidence to the contrary, why is it that the flat-Earth fraternity continues to prosper? This is essentially a psychological question and strictly speaking lies outside the scientific domain. In spite of the evidence, folk choose not to believe. Motivated by religious fundamentalism, pseudoscience or a conspiracy theory mentality flat Earthers seem able to meld irrational concepts into a rational (for them at least) patchwork of ‘reality’. It is too simplistic a notion to state that believers are dumb crazies- this will not do. Indeed, many appear to apply their view of ‘rationality’ consistently and with a fair amount of admirable creativity.

Therefore, we come back to the fundamental question, why? Like a host of psychological phenomena, the answer is not going to be pure or simple. In fact, we should ask why certain people are drawn to a conspiracy and anti-establishment mentality. This is going to be the topic of my next thrilling and hugely informative post: ‘The Madness of Crowds’. Stay tuned and be amazed!