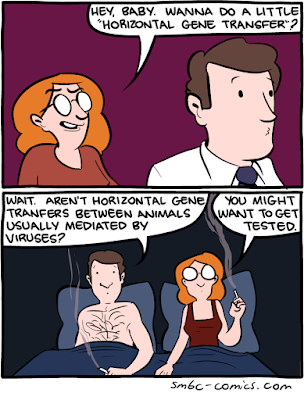 When we think of genetic transfer in organisms we think of direct transfer from parents to offspring. But this is not the whole story. For billions of years genes have been transferred between species by a mechanism known as ‘horizontal transfer’. In essence, genes transported this way can become active in the host organism, therefore, contributing to the creature’s metabolism and perhaps ultimately contributing to the evolution of the species. Bacteria are particularly adept at harnessing this mechanism for its own good through the process of conjugation. Genes involved in antibiotic resistance are often transferred this way between bacteria, not necessarily from the same species.


Now you may ask how can this be? How is it possible for genes to be transferred this way? Even genes from plants have been identified in higher animals such as mammals. Although there are several mechanisms involved, retroviruses remain the main vector. As a digression, it is debatable whether viruses can be counted as life. They are comprised of a protein coat enveloping a piece of genetic code and that is basically it. They do not metabolise or grow or exhibit the main characteristics which distinguish life from non-life and yet they are highly successful and ubiquitous, infecting virtually every organism on the planet. I’m inclined to consider viruses as life, but not as we know it. Unfortunately, I don’t have space here to put forth my reasoning and Dioclese castigates me for being too wordy. Arse. Digression endeth.


Retroviruses have the endearing habit of interlinking their DNA with that of their host. Once the viral DNA leaves during replication it may take chunks of the host DNA with it, thus, the virus particle is able to transfer DNA and genes between members of the same species and between species.


Mosquitos and other blood sustained insects can also act as agents of gene transfer as their blood meal contains DNA from the host. When the insect imbibes again, some of that DNA can be injected into the new host. How foreign DNA integrates into the new host is not well understood but science has shown that it does occur. As mosquitos can feed on different mammalian species this route acts as an important device for horizontal gene transfer.


Various vectors can be utilised by scientists for the process of controlled genetic modification especially involving domestic plant and animal species. In this way, genes which confer positive attributes can be placed into crop and animal genomes. People often have a negative knee-jerk reaction when it comes to genetic modification. However, it should be kept in mind that nature has been transferring genes between species for aeons.


Humans are not immune from horizontal gene transfer and at least 150 foreign genes have been shown to be intercalated into the human genome including genes from fungi and plants. Foreign genes can undergo regulation by the host genome thus becoming functional. This is not necessarily a positive process. The mechanism is uncomprehending and uncontrolled and is as likely to introduce deleterious genes as well as genes exerting a positive influence. Indeed, several cancer-causing genes (oncogenes) have been found to have originated from other species. Ain’t dat the sad truth.


Hippies, please take note: next time you decide to hug a tree you may actually be snuggling up to a relative- please be gentle.