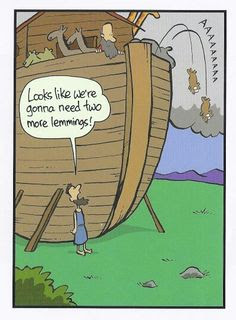 Ken Ham is an Australian living in the US. Nothing remarkable about that. However, Mr Ham is a prominent, vocal, nay strident, proponent of ‘Creationism’ and consequently is not a fan of evolution notwithstanding the overwhelming evidence for the theory. If it contradicts sacred scripture then it can’t be true. Ham and folk of his ilk are happy to bury their intellect in the sand and are not swayed by cogent argument and inconvenient facts which thrust and probe against their irrational but cherished beliefs.


Ham is also the founder of the ‘Ark Encounter’, a theme park for fundamentalist beliefs. Ham, together with his fundy brethren, earnestly believe that the Earth is only 6,000 years old. There is absolutely no evidence to support this viewpoint and indeed there is overwhelming evidence, from numerous sources, to support a 4.5 billion-year-old Earth. Consider how the Colorado River could have carved out the Grand Canyon in 6,000 years. Of course, the rational response is that it has taken millions, perhaps billions, of years to erode the deep gouge in the Earth’s crust. Ham and his cronies are not impressed and are ready and willing to come up with a preposterous counter.


The ‘Ark Encounter’ is a lavish venture, sprawling across acres and nestling cosily to the Kentucky town of Williamstown. An enterprise that only faith and $100,000,000 could spawn. The Ark has been crafted according to biblical proportions and spans a whopping 200 metres in length and comprises seven stories. Modern technology, together with 1000s of artisans crafted the landlocked ship in a mere 2 years. How Noah and his sons constructed the original Ark in 60 years with stone and wooden tools is a conundrum not worthy of rational speculation.


Ham has installed stalls, for two of each kind. Considering the numerous species and their wide-flung geographical distribution it must have taken a miracle to enable all the critters to come together and dutifully enter the Ark without fuss. And then during the voyage, the animals would require fodder and fresh water. Luckily, all creatures of the time were vegetarians so Noah didn’t have to worry about the Velociraptors porking their way through the denizens not equipped with rending talons. I suspect the cleaning of the stalls and the removal of ordure must have been an absolute delight and truly a labour of Job.


It seems the Ark attraction is not attractive enough and attendance figures are well below the projected expectation of 2 million a year. The economically ailing town of Williamstown has not profited much from the ‘trickle down’ effect either. Predictably, Ham has blamed secularists and atheists for the park’s lacklustre performance, declaring that negative reviews and comments have adversely affected investor confidence. The alternative explanation that perhaps folk can see through the shoddy ‘science’ and the blatant commercialism of the project is not an option for Ham’s contemplation.


Let me be brutal. The ‘Ark Encounter’ is a pernicious monstrosity with an inflated $40 ahead entrance fee. Ham would like young minds to consider the book of Genesis as a factual account dictated by the mind of God. To do so is to contradict almost all that we know about science and the world we live in. He doesn’t want visitors to critically review the theme park’s message, he wants them to accept the whole bizarre story without question. Ham considers himself an educator and an imparter of true knowledge. But he is no educator but a promulgator of extreme religious views at total odds with modern scholarship. Most thoughtful, educated Christians are embarrassed by his primitive strident ramblings and are aghast at a literal rendering of the Old Testament. In the long term, Ham’s Ark may be his undoing. The whole attraction is so blatantly ridiculous that young and increasingly secular Americans will see through the lies and risible façade and make up their own minds. I could be wrong, of course, but I’m an optimist at heart.