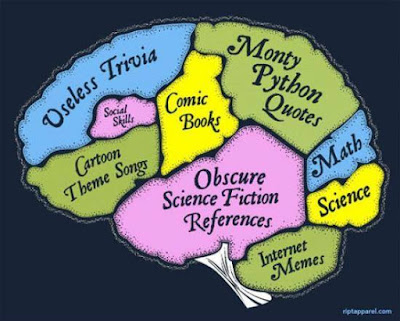 Okay, this brain requires modification. Some of this shit I can relate to. Cartoon theme songs is not even close.  And what the fuck is an internet meme? You need to throw in some white matter about ferrets and just a pinch about hot women jelly wrestling or mud wrestling, I'm not that fussy or pedantic. It wouldn't hurt to have a scantily clad Katie Perry warbling on video, but as always with the sound on mute. In my mind the useless trivia part of the brain would have to be much expanded, as would the math and science bits.

Actually my social skills are enhanced. I'm not some strange mumbling geek; I'm just strange. I converse well with all sort of folk, even fools. My thoughts remain mine, unless provoked. And I can be real charmer when I can be bothered.

Consider this in the light of constructive criticism: where is the portion of the brain allotted to beer and women?  C'mon, beer and women are the main pleasures in life. Otherwise what is the point of existence? Obscure references, wandering off into dark dank places when you are shivering, in the foetal position, gently rocking, doesn't even get an honourable mention.

Seriously folks, this simple model of the workings of a man's brain is insulting and patronising in equal halves. I would raise a petition against this sort of thing, but lethargically, I can't be arsed. In the final analysis, I'm a very, very, lazy man and a tad, odd.