A colleague forwarded a You Tube video to me the other day as she is well aware of my fondness for the bizarre and weird. I've imbedded the video, entitled: 'Why is the government hiding living giants on earth in 2016?', at the end of my rant. If you can't face watching the 15 minutes of utter drivel, read this: A long time ago, fallen Angels mated with women and produced giants with superpowers, both physical and mental. These giants are still with us today and are hell bent on destroying the human race. Actually this is mentioned in the bible but no one except bible literalists and backwoodsmen from Arkansas take this sort of thing seriously. Sophisticated Christians and theologians are happy to accept the relevant passages, and similar, as story telling, allegory and therefore not be accepted as literal truth, unless you are stark raving mad (wibble bottom).


Enter the CIA, stage left. Nefarious government agencies want access, or have already gained access, to giant DNA in order to manufacture ‘super soldiers’ or ‘Uber Men’. People who investigate too closely have been threatened and/or have accidently plunged down disused mine shafts.The narrator, Steve Quayle, reckons he has spent the last 40 years of his life investigating this most disturbing and perplexing phenomenon and believes people should be told and prepared before it is too late. How we, the people, can be fully prepared to fight off a division of 20 foot, super soldiers, he doesn’t say. I have a problem getting out of bed in the morning and the thought of confronting a giant in combat gear is likely to encourage me to stay in bed a little longer. Don’t we have Batman, Wolverine and the Hulk to save us from hybrid giant mutants? I’m starting to digress.


Predictably, Mr Mugumbo, sorry Quayle, offers no corroborative evidence whatsoever. Not a jot. No images or independent testimony. Nowt. However, he did intersperse his video with the usual stock scenes of scientific endeavour; coloured fluids flowing through tubes and blood being squirted into tubes. At the end he finishes with a barely relevant quote from arguably the greatest intellect who has ever lived, Sir Isaac Newton. And here it is:


"About the time of the end, a body of men will be raised up who we turn their attention to the Prophecies, and insist upon their literal interpretation, in the midst of much clamour and opposition"


Newton, for all his scientific rationalism and sagacity was a bible literalist, an alchemist and a firm believer in magic. All this is understandable considering the scientific and religious milieu of his time. You can read more about Newton's preoccupation with the esoteric, here.


What happened to the scientific revolution and adherence to good evidence?


Unsupported hints, drama and unwarranted speculation. Mr Quayle places great store in the rumours of cannibalism in the Solomon Islands during the Second World War. He asserts, with no justification whatsoever, that both American and Japanese troops (Japanese snipers perhaps?) were eaten by giants during the island campaign. Even if cannibalism did occur at this time, is it not more likely that the acts were performed by the Solomon Islanders themselves? This appears to be a more plausible explanation considering the native's proclivity for consuming human flesh, especially brains. Occam's razor anyone?


Who needs evidence when you have giants?


Nowhere during the video is there any concrete evidence proposed for the existence of giants currently roaming the earth. Innuendo and hearsay- nothing that would stand up in a court of law.


There is no God


For amusement, but not edification, I visited a site which is considered 'Pro-giant'. Dutifully I entered the poll concerning a belief in giants. Ninety % of respondents believed in said monsters. Not particularly surprising/inspiring considering the declared nature of the site. Then again, 12 million of the American public believe that their country is being ruled by lizard people and 41 million are of the opinion that Barak Obama is the Antichrist, go figure?


This video has almost got it all: government conspiracy at the highest level; hidden mythical creatures ready to pounce; biblical prophecy akimbo; tubes and cannibalism. All it needs, for completion, is a few hot gypsies  jelly wrestling. On second thoughts I might just be adding my own preference with regard to the jelly wresting (don't knock it until you've tried it).


Therefore, in conclusion, this video panders to humankind's atavistic needs and satisfies the vulnerable and emotional susceptibilities of the usual suspects: the terminally hard of thinking, ill-educated morass of blinkered idiots and fools. Gullible folk without a critical thought in their head, who are willing to accept the most preposterous assertions without hard data.


Frankly, I live in hope and despair for mankind in equal proportion. 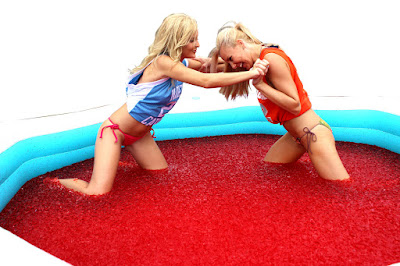 And another thing. Why isn’t jelly wrestling an Olympic sport, yet?