Church of the Flying Spaghetti Monster

I must let the World know of the one true way. There is only one route to wisdom and strife and that is through the ‘Flying Spaghetti Monster’- the only pasta deity worthy of your consideration and worship. Take heed and you shall be rewarded in the after-life by being marinated in a rich tangy sauce.

The ‘Flying Spaghetti Monster’ was revealed to the one true Prophet, ‘Bobby Henderson’ (All Hail Bobby Henderson) in 2005. He had just returned from a heavy drinking session at the local hostelry when the room began to spin and out of the corner of his eye he espied the ‘Noodly One’ which spoke to him as if in a drunken dream. “O mortal, you have been chosen by the one true Pasta to spread “The Doctrine’ and spaghetti sauce to the unredeemed masses”. Henderson, after hearing the unearthly pronouncement, fell into a coma and awoke next day with a head full of demons. There is a price to be paid for communing with pasta and drinking 15 pints of best bitter. Subsequently, our Lord Noodle passed on his Gospel, aptly called: ‘The Gospel of the Flying Spaghetti Monster’ or the 'Book of Moron'.

The true disciple should be vigilant and tasked with rooting out the heretic dwelling amongst us. Here are just a few of the breakaway sects which have left the true ‘path of light’ (light sauce) wandered down a meandering road which ends in purgatory and inferior pasta…....

The First Church of the Pure Noodle Doodle


The breakaway sect, ‘The First Church of the Pure Noodle Doodle’ differs in their dogma from the devout 'Pastafarian'. Whilst the  devout Pastarfarian believe that the 'Spaghetti Monster' is made from the finest durum wheat, the 'Noodle Doodles', as they like to be called, contend that the most highest is not of corporeal flour but consists of pure ethereal energy, or 'The sauce' (May the Sauce be with you). This doctrine is particularly repellent to the true believer as we believe that we must taste the body of the Spaghetti Monster in order to receive true salivation.


The United Pastafarians promote love, peace and harmony amongst the various sects. They call for unity and acknowledge that the ‘Great Noodly One’ caters for all tastes and exists in many forms (penne, tagliatelle, and even ravioli); all tomato based sauces are acceptable, regardless of seasoning. Often regarded as the most thoughtful and learned of the various Pastafarian sects, 'The United Pasterfarians’ come together in enclave to debate how many meatballs can be fitted in a can. (standard or large? Meat ball or can?).


They aver that there is no pasta based monster except for the ‘One True One’. While the other sects do not rule out the possibility of other food based monsters, the ‘Fundamentalists’ are exclusive and consider a belief in other monsters as the worst form of blasphemy. Believers in ‘manifold monsters’ and especially wheat derived fancies, are deserved of death. This fundamentalist breakaway sect was founded by ‘Reg’. Reg received his revelation on the way to the Tipton Mental Hospital in 2008 where he was struck in the head by a can of spaghetti hoops which sent him temporarily blind.


Reg, once he had recovered, announced a 'holy war' against the infidel non-believer and all who do not recognise spaghetti hoops as the only true pasta in a juicy tomato like base. Reg, recognises Reg, as the one true profit and accepts all major credit cards. Here is Reg's theology in a can. NB: His worst invective is reserved for the original Pastafarians:- "Lo, the unbeliever (cursed be his name) shall be expunged from the earth and his abode strewn with inferior pasta type products. Those vile Pastarfarians who do not repent and worship the 'Hoop' shall be stripped bare, whipped with limpid spaghetti before having their noodle sawn clean orf".


Let us be vigilant and not be swayed by the multitude of heretic sects. Adhere to the one true way and you will, in the afterlife, be bathed in a tepid rich tomato sauce and eternally stroked by the Spaghetti Monster’s infinite tendrils of the finest Durum pasta. As for the heretic: they can expect to be marinated in a scalding hot inferior sauce for an eternity....... 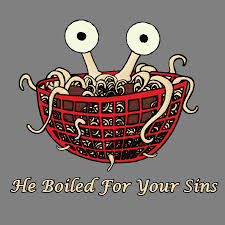 Gentle believers, you have been warned- Don't be fooled by impastas!